Is the decision in Grimason disproportionate?

Is the decision in Grimason disproportionate?

Is it just her or does the decision in Grimason v Cates [2013] EWHC 2304 (QB) seem a bit disproportionate, asks Ruth Pratt?

Grimason was a case where the landlord obtained forfeiture of a lease on the basis that the tenant had not paid ground rent totalling £600. Grimason had bought the flat in 2006 for £100,000. She didn’t attend the forfeiture proceedings because, on her case, she had not been aware of them due to a failure properly to serve her with them. The forfeiture order was made in June 2011.  Nine months later the landlord sold the flat for circa £100,000.

Needless to say Grimason appealed. Her submissions on failure to serve were rejected. So were her arguments that the forfeiture hearing had not been a ‘trial’ as such and so her seeking of relief from the forfeiture order should be considered under CPR 3.9 (relief from sanctions) and not the stricter CPR 39.3(5) failure to attend trial criteria.  Grimason failed on all counts – see our report below.

But! What was really interesting from my perspective was that the end result was, in effect, that  the landlord ‘recovered’ £100,000  to satisfy a debt of £600.  That’s arguably something of a windfall.  Grimason had tried to argue unjust enrichment and restitution but these failed. She then tried to argue that the result was so disproportionate as to amount to a decision that no reasonable tribunal could have come to (Wednesbury principles) and a breach of her Human Rights (Human Rights Act 1998, Article 1 of the First Protocol: right to peaceful enjoyment of possessions).  Disappointingly, in dismissing this ground of appeal the judge simply stated it lacked merit without providing further analysis.  A bit more flesh on the bones of his reasoning might have been a bit helpful.

Of course, there’s no guarantee the landlord’s subsequent sale would result in such a ‘windfall’ – markets could have been falling, but the fact remains he did rather seem to come out on top to a significant degree.  Was that the right, fair, proportionate result? Does it matter? What do you think? Leave us a comment below.

Meantime, I’m off to check I’ve paid my ground rent/whether I can forfeit my tenant’s £400,000 lease for failing to pay £200 ground rent – delete as applicable… 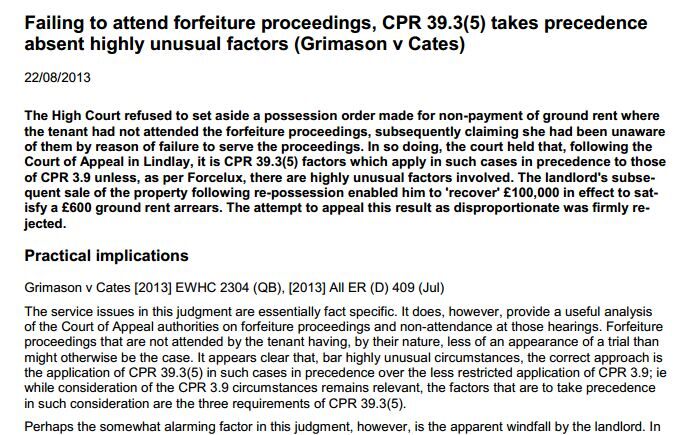 Click image to read full report. This report was first published by LexisPSL. If you are not a subscriber, please click here to find out more and to access a free trial.