On 13 November 2019, The Hampton-Alexander Review (the Review) published its penultimate progress report ahead of the December 2020 target for its key recommendations aimed at increasing the number of women in senior roles. Amongst these recommendations is that members of the FTSE 350 have at least 33% female representation on their boards. With this in mind, Market Tracker has conducted research looking into FTSE 350 companies’ progress against this target in the 2019 AGM season*.

2019 has been a progressive year for gender equality initiatives, with the 30% club reporting in October that, for the first time in 450 years, the UK has at least 30% women board members across the FTSE 350. This echoes the Review’s enthusiasm that 2019 has been the ‘strongest year of progress since targets were first set in 2011’. Similarly, Market Tracker’s research has also shown steady progress this season, with 33.6% of the FTSE 350 hitting or exceeding the Review’s target of 33% female board members, up from 22.8% in 2018. With a further 20.1% of companies on track to achieve this target, there has been notable progress in 2019. 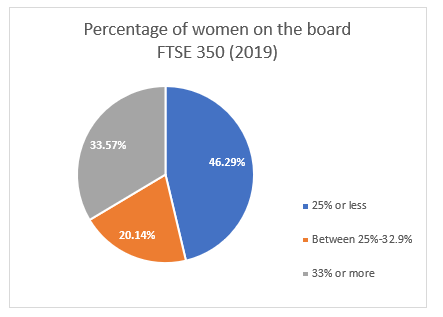 As the deadline approaches, these figures could be attributed to numerous factors. There has been much research around the economic and business benefits to be gained from promoting more women, with the 2017 Mckinsey review recognising a positive correlation between ‘women in leadership roles and the financial performance of businesses’. Furthermore, in October 2019, Deloitte published a report noting ‘companies are increasingly going beyond financial drivers and focusing on ‘success factors’ such as societal and environmental impacts’, amongst which diversity is one of the key considerations.  This is in response to investors focusing ‘increasingly on the longer term and broader value creation in making their investment decisions’. This shift in investor focus is also portrayed in the update to the Institutional Shareholder Services’ (ISS) 2020 benchmark policy (November 2019). Changes included the recommendation that shareholders vote against the chair of nomination committees where there are no female directors. This is also reflected in the 2018 Corporate Governance reforms, effective as of January 2020, which focuses on succession and diversity. As such, we can expect this trend in increasing diversity at board level to continue to increase next year, ahead of the 2020 deadline.

Whilst the FTSE 350 has made good overall progress towards these targets, these figures greatly vary amongst different sectors.  Amongst the highest performing sectors lies consumer products, where 75% of the companies within our sample have met or exceeded the target, and the remaining 25% is on track to do so by the imposed deadline.  Contrastingly, the mining sector, which has always been considered a male dominated industry, is still lagging with 76.9% of companies having less than 25% female representation on their boards.  In fact, the Review notes that only 33.3% of companies in the mining industry had shown progress regarding female board representation, with 41.7% showing a decrease in representation.

The Review notes that ‘a number of companies identified the poor gender representation in the broader sector they operate in’. As such, ‘The Women’s Business Council has been refreshed to focus on the sectors where the biggest change is needed to close the gender pay gap and improve women’s representation’. This is reflected in the Women’s Business Councils’ 2018 progress report highlighting numerous initiatives to improve gender representation in these sectors, including the increased focus on females in STEM. Whilst Market Tracker has found that 87.5% of boards in the computing and IT sector still have less than 25% female board representation, there is notable progress. The Review highlights that whilst these figures remain low, 80% of these companies have improved their female board representation.

However, whilst the increasing scrutiny around diversity has pushed up the number of women on boards, Market Tracker notes that, when isolating this data, there is a significant discrepancy between executive and non-executive female board composition.  Of the FTSE 350, 62.8% of companies have 33% or more female representation in terms of their non-executive directors. This figure notably decreases to 16.1% for female executive director representation. The lack of women is also reflected at the highest levels, with only 8 female CEOs in the FTSE 350.

Crest Nicholson plc exemplifies this difference, whereby they have significantly succeeded the target during our research period with 50% female board members. However, none are executive directors.  Notably, the company has only 21% of females in senior management roles. Addressing this, the company acknowledges the ‘growing pressure on all businesses to improve gender equality and ensure women are strongly represented at a senior level’ and is investing in training in order to create a diverse pipeline.

This stance is in line with the 2018 UK Corporate Governance Code, which requires a greater focus on transparency and succession planning and how this ‘promotes diversity of gender, social and ethnic backgrounds, cognitive and personal strengths.’   Similarly, the Hampton-Alexander Review notes the necessity of a diverse pipeline in order to push women to the highest roles, and as such extends the 33% target below board level, to senior leadership roles. At this level, the Review notes that two thirds of all appointments are still going to men, and unless there is a substantial change, with half of all appointments going to women, the FTSE 350 will not meet this target.  See Market Trackers analysis on women in senior management for more information on the FTSE 350s progress in this area.

For more information on this, and other corporate governance issues, look out for Market Tracker’s 2019 AGM report, to be published November 2019.

*The AGM 2019 season is defined as companies whose financial year end is between April 2018 and March 2019 (excluding closed ended investment funds).