Lexis®PSL Corporate and Market Tracker has conducted research to examine the current trends in UK public M&A for the period 1 January 2020 to 31 March 2020.

Lexis®PSL Corporate and Market Tracker has conducted research to examine the current trends in respect of UK public M&A. Data for this report has been sourced from the Market Tracker transaction data analysis tool which allows users to access, analyse and compare the specific features of numerous corporate transactions. This is an update to our UK public M&A deals in 2019—Market Tracker Trend report in which we examined firm and possible offers announced in 2019.

The final date for inclusion of developments in this report is 31 March 2020. Reference has been made to developments after this date if considered noteworthy.

Deal activity was significantly lower in Q1 2020 compared with previous quarters in 2019. While some of this drop in activity may be attributable to recent stock market volatility, deal activity was also down in the first two months of the year prior to the stock market crash in March. Key highlights of Q1 2020 include:

• 75% of firm offers were public to private transactions 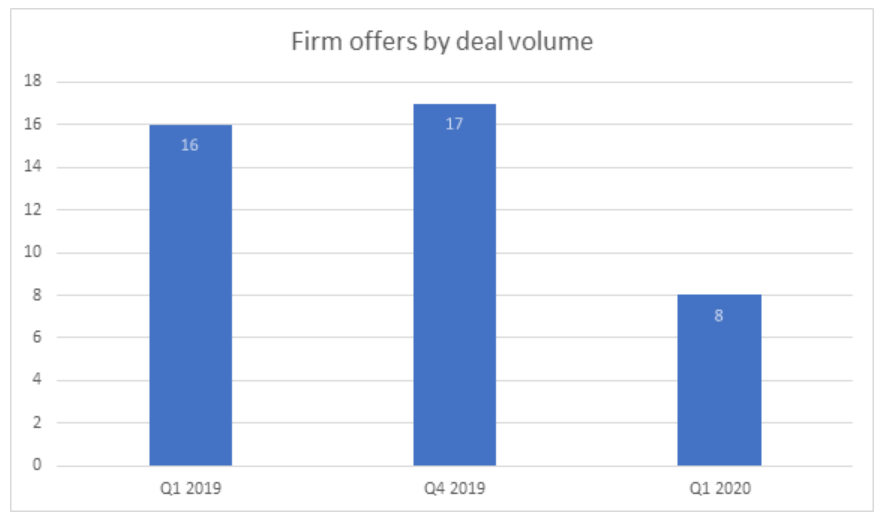 Aggregate deal value was £2.4bn, which represents a significant decrease compared with Q1 2019 and Q4 2019 (£14.1bn and £11bn respectively). Average deal value was £300m (Q1 2019: £880m and Q4 2019: £646m) and there was only one transaction where the deal value exceeded £1bn. This was Freshwater Group’s offer for Daejan Holdings, which valued the entire issued share capital of Daejan at £1.3bn and the 20.5% free float shares not already held by the Freshwater Group and its concert parties at £270m. The second largest transaction was Anglo American’s £404m offer for Sirius Minerals. 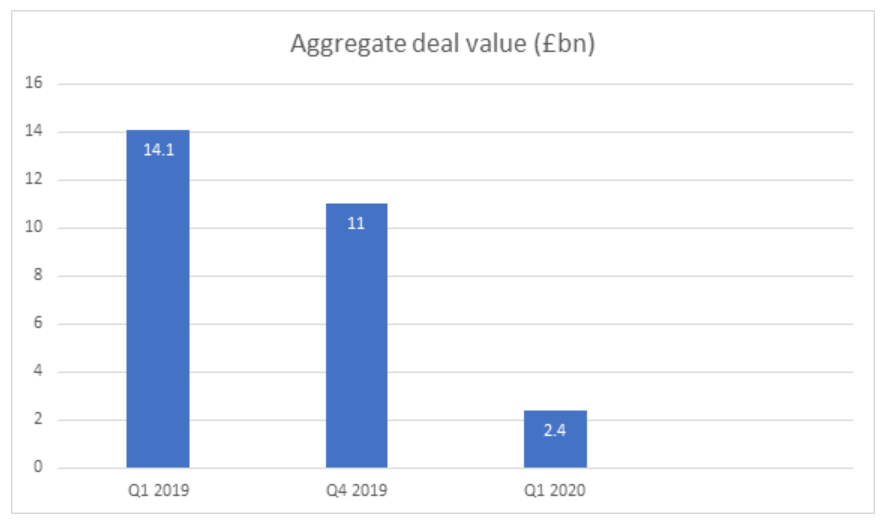 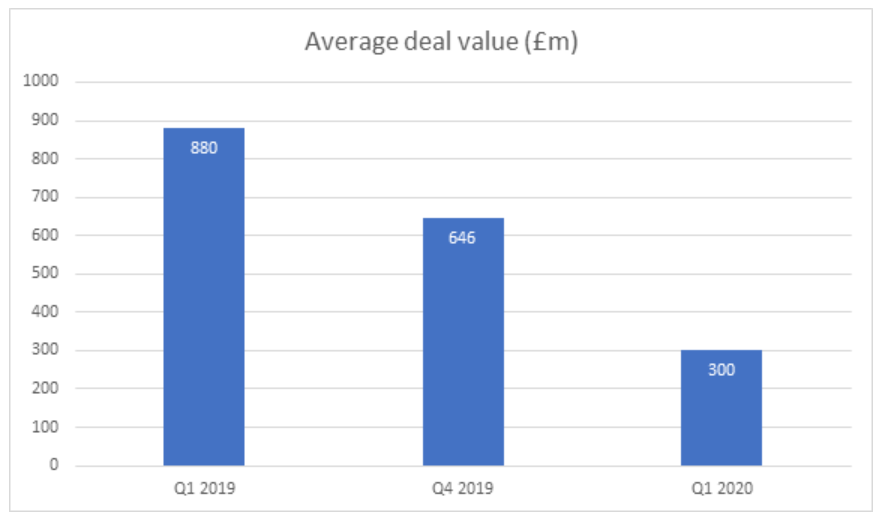 Only one takeover in Q1 2020 was structured as an offer. This was Redmile Group’s £29m mandatory offer for Redx Pharma, which took place against the backdrop of a potential competing bid by Sam Waksal and associates.

The government’s ‘Stay at Home’ measures implemented in response to the coronavirus pandemic provide that public gatherings of more than two people are currently not permitted. On a scheme of arrangement, this presents legal and practical issues as companies are required to hold shareholder meetings to approve the scheme. The government has announced that it will be introducing legislation to ensure those companies required by law to hold AGMs will be able to do so safely, consistent with the restrictions on movement and gatherings introduced to address the spread of coronavirus. Companies will temporarily be extended greater flexibilities, including holding AGMs online or postponing the meetings.

It is not clear whether this impending legislation will extend to all shareholder meetings, but in the meantime an example of how companies are responding to these challenges is ii Group’s offer for Share where notices of the court meeting and general meeting to implement the scheme had been sent to shareholders before the introduction of the Stay at Home measures. Following the introduction of the measures, Share issued an announcement informing shareholders that they must not attend the scheme court meeting or the general meeting in person and encouraged them to submit their votes by electronic proxy (although written proxy votes would also be counted if submitted validly). For further details on the practicalities of holding shareholder meetings during the coronavirus crisis, see Practice Note: Coronavirus (COVID-19)—holding general meetings and AGMs.

There was one cash and shares offer in Q1 2020. The remaining seven firm offers were cash offers. Of the eight firm offers announced in Q1 2020:

• one was financed by a combination of an equity subscription and debt finance (12.5%)

• one was financed by a combination of existing cash resources and debt finance (12.5%)

These figures are similar to previous review periods. 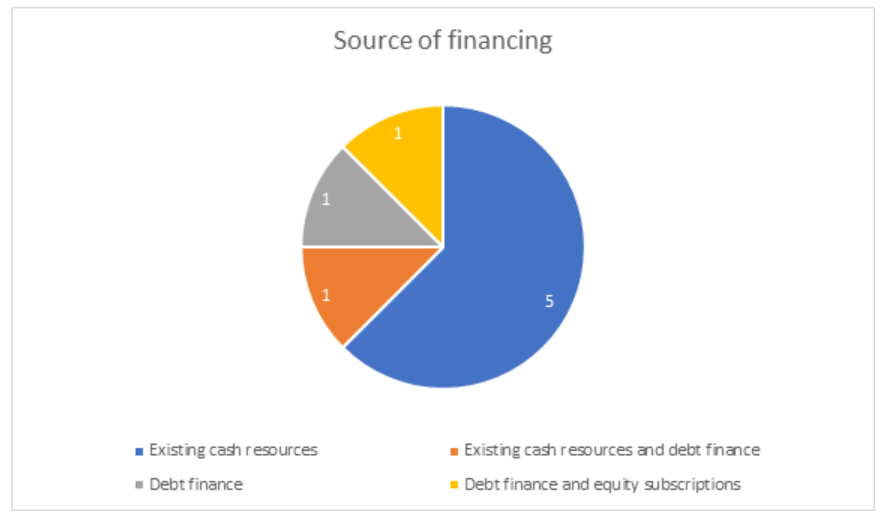 There were no hostile offers in Q1 2020, but two companies were the subject of potential competing offers: NMC Health and Redx Pharma.

On 10 February 2020, NMC Health announced that it was in discussions with two separate bidders, KKR and GK Investment Group Holdings in relation to possible offers for the company. KKR withdrew its interest on 11 February and GK Investments issued a no intention to bid statement on 9 March.

• 31 December 2019: Redx Pharma announces that it is in discussions with Yesod Bio-Sciences about a possible offer

• 28 February 2020: Redx announces that it has terminated discussions with Yesod

• 28 February 2020: Redx announces that Redmile has agreed to provide a short term loan of £5m and to subscribe for shares representing 6% of Redx’s enlarged issued share capital at an aggregate subscription price of £1.3m. It also announces that Redmile and Sofinnova Partners intend to commit further investment to the company, which is expected to take the form of a £20m convertible loan

• 13 March 2020: Redx announces that it has received a further private approach from Yesod about a possible offer

• 13 March 2020: Redmile announces it has acquired an additional 39.5% shareholding from Redx’s largest shareholder, Moulton Goodies, which triggers a mandatory offer. The Redmile offer is recommended by the Redx board

• 30 March 2020: Redx announces that the £5m short-term loan has been entered into with Redmile

Public M&A activity was not centred around one or two sectors, but across several industries. Firm offers were made for targets in the following sectors: Computing & IT (1), Financial Services (1), Media & Telecommunications (2), Mining Metals & Extraction (1), Pharmaceuticals & Biotechnology (1), Property (1) and Retail & Wholesale Trade (1).

In our UK public M&A deals in 2019—Market Tracker Trend report we reported on increased shareholder activism on takeover transactions. An example of this trend continuing in Q1 2020 was Anglo American’s offer for Sirius Minerals, where shareholders such as Jupiter Asset Management and Odey Asset Management urged the Sirius board to seek better offer terms or to pursue alternative rescue plans. The Sirius board also held talks with Sharesoc, a group which represents individual investors, which had raised concerns about the transaction. Around half of Sirius’s shareholders (85,000) were retail investors, and the company required their support to approve the scheme.

Sirius and Anglo American did, however, receive support for the deal from proxy advisor firms, ISS and Glass Lewis, who agreed that if the transaction did not proceed, the company would most likely be insolvent by the end of March.

The scheme narrowly obtained the requisite majorities needed for its approval with approximately 20% of shareholders voting opposing the resolutions proposed at the court meeting and general meeting.

All but one of the possible offer announcements were made in January and February, before the severe declines in global stock markets that took place in March.

Firm offers included in this report

*This value is based on the entire issued share capital of the target. The 20.5% free float shares not already held by the Freshwater Group and its concert parties was valued at £270m.

**Infopro Digital Group is a Netherlands company, which is majority-owned by Towerbrook Capital Partners. Towerbrook is co-headquartered in New York and London.

***ii Group is registered in Guernsey and is majority owned by a fund managed by JC Flowers & Co.