Cash is king in 2019 takeovers

Cash is king in 2019 takeovers

The Market Tracker team has conducted research across the takeovers announced during 2019. Our research found that cash remains an overwhelmingly popular choice, with 83% of all bidders offering cash as either all or part of the consideration for the transaction. This is a decrease of 11% from 2018, where 93% of the firm offers announced in 2018 had some form of cash element.

In total, 76% of all deals offered cash only, which showed little change from our findings in 2018. Consideration consisting of a mixture of cash and shares accounted for 4%, and one deal offered cash and an unlisted security alternative (Harwood Wealth Management offer by The Carlyle Group). Bidders offering shares as the only form of consideration made up 18% of all the transactions reviewed in 2019, a significant increase from the 7% of share only firm offers in 2018.

The Market Tracker team also conducted research in relation to the main sources of financing in 2019. Debt finance was the most popular source of financing, accounting for 34% of all transactions. Private equity funds (29%) and existing cash resources (23%) were also utilised by several bidders. It should be noted that these statistics do not consider whether bidders used a combination of different sources to finance, but nevertheless show that shareholders of target companies chiefly received cash in consideration. 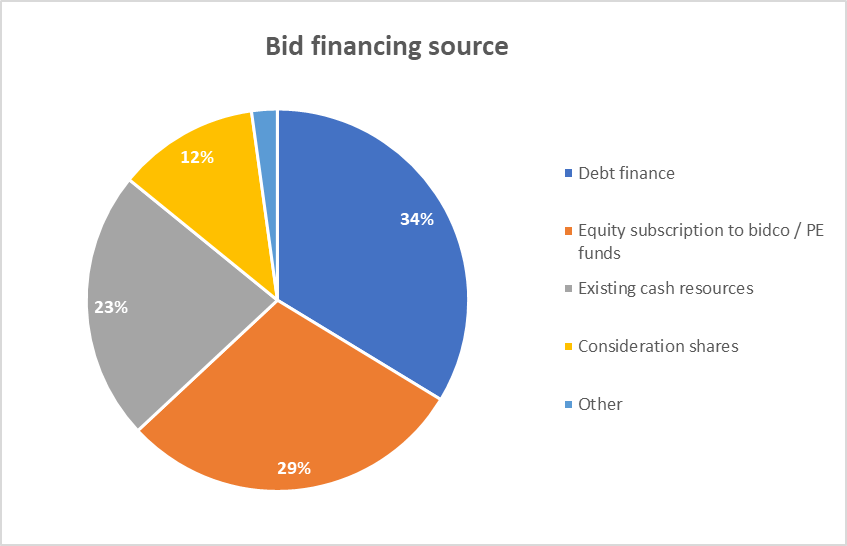 Market Tracker will look in more detail at consideration and bid financing, in addition to the key deals during 2019 and overall statistical findings in our Public M&A annual review, to be released during Q1 2020.

Last one out: No bidders for Eddie Stobart
Corporate Law | 2 min read