This review looks at the 22 companies which listed on the standard segment of the Official List 2019 (by way of IPO, introduction or transfer from AIM) and forms part of our annual trend report which aims to provide insight into the current dynamics of ECM activity in the UK. The other parts of our 2019 trend report comprise:

Prior to the harmonisation of certain key elements of capital markets regulation across the EU, the UK listing regime was divided into a system of primary and secondary listing. A primary listing was the main listing category available to both UK and overseas issuers able to comply with the high standards of primary market regulation in the UK. The secondary listing category was reserved for overseas companies with a primary listing in their home jurisdiction and such companies were subject to a lower level of regulation under the UK Listing Rules.

The primary and secondary listing categories morphed into what we now know as the premium and standard listing segments when EU capital markets regulation relating to listing and disclosure was more closely aligned in 2005.

The UK’s more stringent ‘gold-plated’ primary listing rules which were over and above the EU minimum standards for admission to trading on an EU regulated market were retained for the premium listing segment whilst the standard listing segment was preserved for those issuers only able to comply with the EU minimum requirements.

More recently in 2017, the FCA launched a review of the split of the listing regime. In its Discussion Paper DP 17/02: Review of the Effectiveness of Primary Markets: The UK Primary Markets Landscape published in February 2017, the FCA noted that a standard listing has been perceived as an unattractive option for a listing. The lack of inclusion in FTSE indices also made a standard listing unattractive for larger companies. Stakeholders indicated that the purpose and obligations of a standard listing were unclear as well as the name suggesting it as a ‘second best’ option.

However, some market participants thought that there should be some degree of accommodation for companies wishing to list on the Official List which cannot or do not wish to comply with the ‘super-equivalent’ requirements of a premium listing.

In its Feedback Statement FS17/3, October 2017, the FCA stated that due to the market’s divergent opinions on the standard segment, it would give further thought on how to enhance the standard listing regime in due course.

At the end of the Brexit implementation period, the FCA may have more freedom in relation to what it can do with the standard listing category. If no agreement in this area is reached between the UK and the EU, the UK will not be obliged to maintain a listing category that is subject to the EU minimum requirements alone. 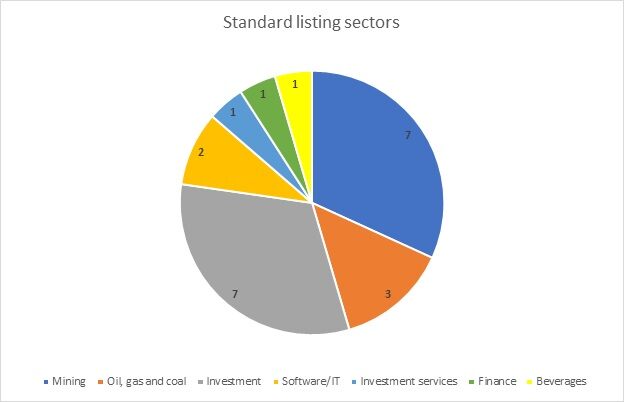 Eight companies which listed on the standard listing segment in 2019 were special purpose acquisition companies or SPACs formed specifically for the purpose of making an acquisition. These do not meet the eligibility criteria for a premium listing as they do not have the required revenue earning track record or an independent business as required by LR 6.3 and 6.4 of the Listing Rules. SPACs will also not generally meet the eligibility criteria for a premium listing under chapter 15 of the Listing Rules as closed-ended investment funds as they do not invest in assets with a view to spreading investment risk as required by LR 15.2.2.

SPACs are eligible for admission to AIM but must undertake a fundraising of at least £6m and must implement their investing policy within 18 months of admission or seek shareholder approval for their investing policy at the next AGM and on an annual basis thereafter until the investing policy has been substantially implemented (Rule 8 of the AIM Rules for Companies). There are no equivalent rules relating to SPACs listing on the standard listing segment of the Official List.

Only one SPAC was admitted to trading on AIM in 2019 (Longboat Energy plc raising around £9.5m on admission).

Nine of the 22 companies which listed on the standard listing segment in 2019 were dual listed. Seven of the dual listed companies were in the natural resources sector.

Coco-Cola European Partners delisted from Euronext London on obtaining its standard listing on the London Stock Exchange. It is also listed on the NYSE, Euronext Amsterdam and Spanish Stock Exchanges.

Huatai Securities Co., Ltd obtained a standard listing for its GDRs in June 2019 under the Shanghai-London Stock Connect scheme which connects the London Stock Exchange with the Shanghai Stock Exchange allowing companies listed on one market to list depositary receipts on the other market. It was the first company to make use of this scheme which was launched in the same month.

Reasons for a standard listing

Generally companies obtaining a standard listing are either not eligible for a premium listing (for example, they are newly incorporated and do not have a trading history) and/or do not wish to comply with the additional requirements imposed on companies with a premium listing.

The key eligibility criteria for a company applying for a standard listing are that its securities are freely transferable, it has a market capitalisation of at least £700,000 on admission and a free float of at least 25%.

A company listing on the premium listing segment must comply with the more stringent super-equivalent eligibility rules including having:

The continuing obligations for a premium listed company are also more onerous.

•             a standard listing will mean the company is not required to comply with super-equivalent provisions of the Listing Rules which has a direct cost saving, and

A company with a standard listing does not need to comply with rules relating to: 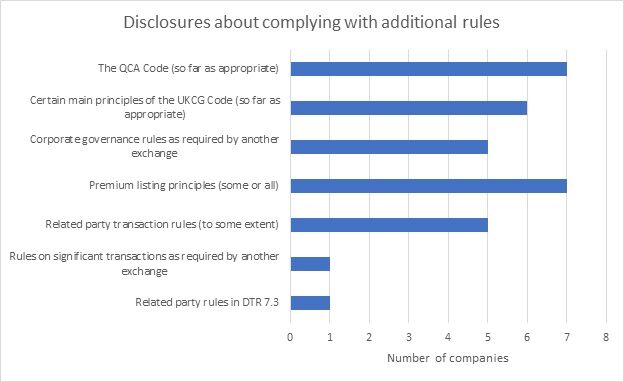 Seven companies stated they intended to comply with the Corporate Governance Code issued by the Quoted Companies Alliance (QCA Code) and six companies stated they intended to comply with certain main principles of UK Corporate Governance Code (UKCG Code) in all cases so far as appropriate to the company’s size and nature. Five dual listed companies made a statement that they comply with rules on corporate governance as required by another exchange or by the company’s overseas country of incorporation.

One company stated that the directors had given due consideration to the principles and recommendations set out in the UKCG Code but did not state whether they intended to comply or not.

Seven companies stated that they would comply with some or all of the Premium Listing Principles.

One dual listed company made the statement that it must comply with certain rules relating to significant transactions and related party transactions under the rules of the other exchange.