Market Tracker reviews the SPACs making a debut on the London markets since January 2019.

On 27 July 2021, the Financial Conduct Authority (FCA) announced changes to the Listing Rules regarding special purpose acquisition companies (SPACs), following a consultation that began in April 2021. In a move intended to attract investment to the London markets amid competition from Frankfurt and Amsterdam, the regulator will not seek to suspend trading in a SPAC’s shares once an acquisition target has been announced, for SPACs meeting certain criteria. These include a minimum fundraising threshold of £100m (previously £200m was proposed) and a 24-month acquisition timeframe which may be extended by 12 months subject to shareholder approval (and a further 6 months period under limited circumstances, for example where an acquisition is in progress). It is intended that the measures will afford larger SPACs greater flexibility, while continuing to promote investor protection and the smooth operation of markets. The new rules and guidance come into force on 10 August 2021. For more on this, see our news story: FCA publishes final SPACs rules to strengthen protections for investors [LNB News 27/07/2021 52] (A subscription to Lexis®PSL Corporate is required).

In light of these recent changes, Market Tracker conducted some research into the SPACs making a debut on the London Stock Exchange since January 2019. Our research indicated that 19 SPACs had been admitted to trading during this period, with eight in 2019, increasing to nine in 2020. There have only been two so far in 2021. Of these 19 companies, 17 opted for a standard listing on the Main Market and the remaining two chose to list on AIM.

SPACs are defined as companies that list on a stock exchange with a view to acquiring an existing company within a set timeframe. The process is considered to be a speedy alternative to the traditional IPO process.

Companies will look to make acquisitions in a sector that resonates with the experience and background of the Board. The most common industry sector for proposed acquisition targets in the data set we reviewed was the natural resources sector, with nine companies (47%) seeking prospects in Renewable Energy, Mining, Metals and Extraction, and/or Oil and Gas. Five companies stated a wide range of industry sectors or did not specify, two were seeking opportunities in the Pharmaceutical and Biotechnology sector, and the remaining three companies had niche acquisition strategies focused on Education, Media, and Marketing respectively. 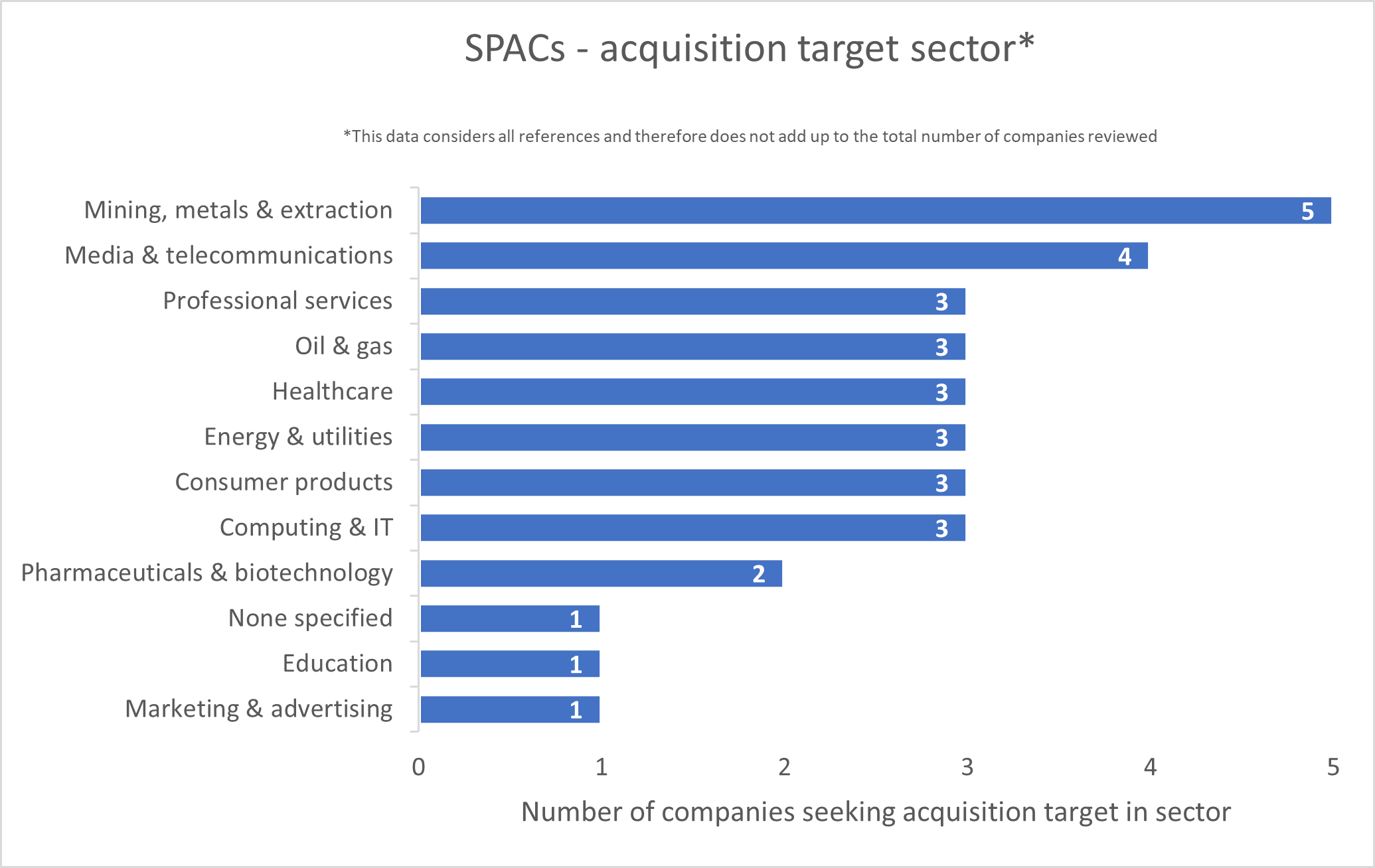 In light of the existing framework, the timeframe given in prospectuses ranged from 12 to 36 months, with eight companies specifying a 24-month period before seeking shareholder approval to continue operating where an acquisition had not been made. Five companies did not specify a time limit, four specified 18 months, and one gave a period of 12 months before review. The longest timeframe we saw was EverArc’s 36 month limit which, although longer than the others we had looked at, employed similar wording in its prospectus:

It is anticipated that the FCA’s revised approach may stimulate activity in this area by encouraging an increased number of foreign SPACs to list in London. Market Tracker will continue to monitor developments in this area to assess the impact and emerging trends later this year.

The data contained in this update has been extracted from our Market Tracker database, which covers almost 7,000 public company transactions, including mergers & acquisitions, initial public offerings and annual reporting categorised within a powerful platform which allows analysis and comparison of the specific features of corporate transactions and provides fully searchable access to the related announcements and deal documents (a subscription to Lexis®PSL Corporate is required).

Law firms capitalise on a busy IPO market – who acted on the key deals in H1 2021?
Corporate Law | 17 min read