We reviewed a total of 522 secondary offers (289 on the Main Market and 233 on AIM). Secondary offers for the purposes of this review include placings, open offers, offers for subscription and rights issues raising £10m or more in gross proceeds for the company.

This review of 2019 secondary offers forms part of our annual trend report which aims to provide insight into the current dynamics of ECM activity in the UK. The other parts of our 2019 trend report comprise:

AIM continued in decline, while Main Market picks up slightly 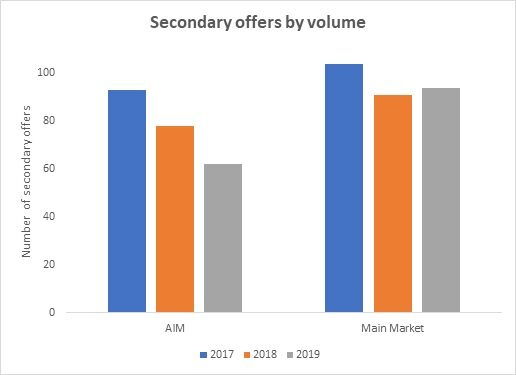 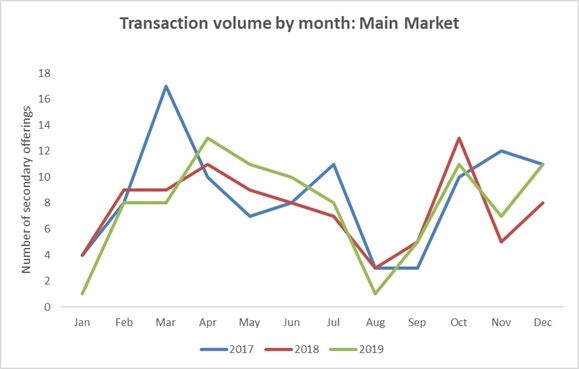 Deal activity on the Main Market by month in 2019 followed a similar pattern to that seen in 2018 with peaks in April and October and lows in January and August. Both years saw an uptick in activity in December whereas 2017 showed a slight decline in deal volume at the end of the year. 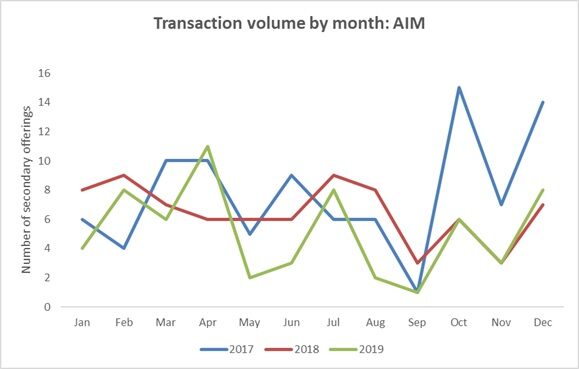 Transaction volume on AIM by month was more erratic although all three years showed the largest drop in activity in the month of September. February, April and July were the most active months for secondary offers on AIM in 2019.

Overall decline in total funds raised across both markets 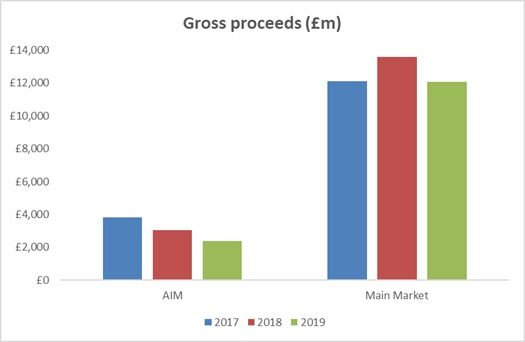 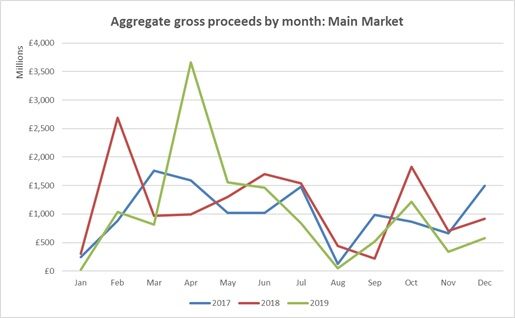 Looking at gross proceeds raised by month on the Main Market in 2019, there was a large peak in April when AstraZeneca completed a £2.69bn placing (the largest secondary offer since 2015). April also saw the most deal volume in 2019. All years saw the least amount raised in January and August/September which coincides with the dips in deal volume in these months. 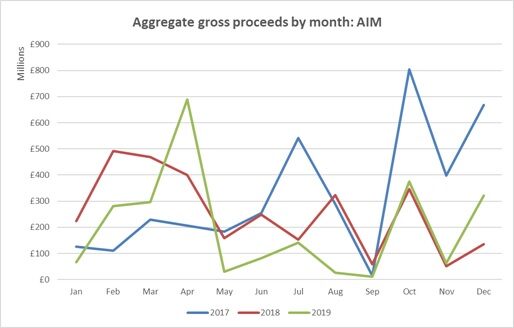 AstraZeneca topped the charts with a £2.69bn placing, making it the largest transaction since Standard Chartered’s £3.4bn rights issue in 2015 and the highest grossing placing the market has seen in the last ten years. The company took to the market to fund a collaboration with Japanese company Daiichi Sankyo to expand its oncology portfolio.

Retailer Marks & Spencer conducted the second highest grossing transaction of 2019—a fully underwritten rights issue raising £600m in May. The company announced that the proceeds would be used to fund a joint venture with Ocado Group plc in a move that would open the company up to Ocado’s online technology and extensive delivery network, allowing it to bring its food range online.

Chinese energy company Datang International carried out a placing in late March. Although it was conducted with little publicity, it was the third-biggest grossing Main Market transaction in 2019, amassing approximately £599m in gross proceeds.

Real estate specialist Globalworth conducted the two biggest grossing secondary fundraisings on AIM in April and later in October 2019, netting a combined total of £530m. The company announced in April that it intended to use the proceeds to fund a significant pipeline of attractive investment opportunities in both Poland and Romania. In October, it tapped shareholders again, citing strong portfolio growth since April and further development opportunities in the pipeline.

April also saw resources company Diversified Gas & Oil conduct a placing valued at around £177m. Structured as an accelerated bookbuild, the company experienced a significant level of oversubscription in the placing, leading to a secondary sale of 12.5 million existing ordinary shares by shareholders. The funds raised by the placing were used towards the Company's acquisition of 107 producing gas wells from HG Energy II Appalachia. 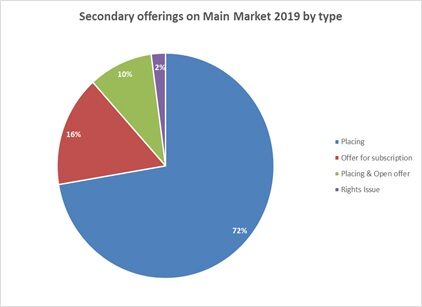 2019 saw an increase in offers for subscription back up to the level seen in 2017, although our data shows these transactions were the lowest grossing of the four types of secondary offering covered by Market Tracker, averaging £24m per transaction.

Rights issues remain the highest grossing sub deal type per transaction, with an average of £400m raised per deal. This was largely bolstered by the £600m fundraising by Marks & Spencer in May. However there were only two rights issues in 2019, the lowest we have seen in the three-year period and an 87% decrease from the 15 rights issues carried out in 2018. Rights issues are favoured by investor groups for large fundraisings as existing shareholders get the opportunity to invest in the company pro rata to their existing shareholdings and accordingly can avoid being heavily diluted.

As in previous years, placings in 2019 continued to be the most popular way for companies to carry out a secondary fundraising as they can usually be completed quickly and without the need to publish a prospectus. In 2019 placings made up 72% of all secondary offerings by type. This is an increase from the previous year, where placings made up 63% of all secondary offerings. Placings similarly accounted for 75% of all gross proceeds raised in 2019, helped in no small part by the £2.69 billion fundraising by AstraZeneca. 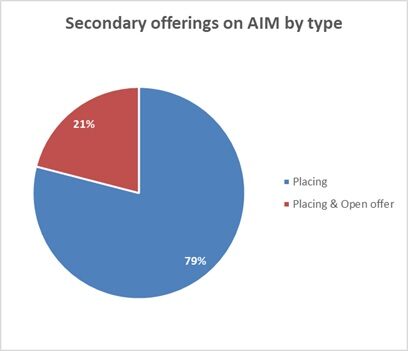 Although placings remained the most common transaction type by a wide margin on AIM, placings combined with an open offer increased in popularity in 2019 in comparison to previous years, with 21% of transactions using this structure versus 8% in 2018 and 17% in 2017. Unlike the Main Market, the junior market saw deal volume by type largely reflected in gross proceeds by type, with the 79% of placings contributing 78% of aggregate gross proceeds over the year.

Investment most active sector by volume 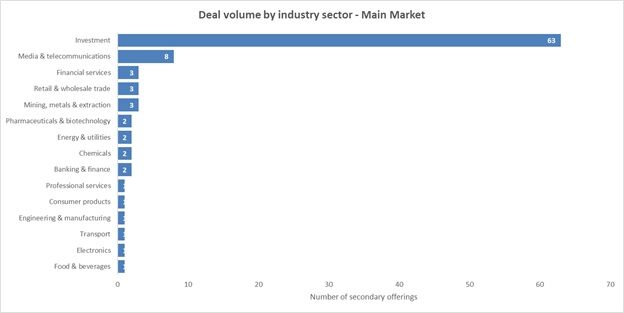 Investment was the highest volume deal sector for Main Market transactions in 2019, accounting for 67% of all secondary offers on the Main Market, creeping back up from 51% of all deals by volume in 2018. This can largely be attributed to the high number of investment companies in the FTSE 350. 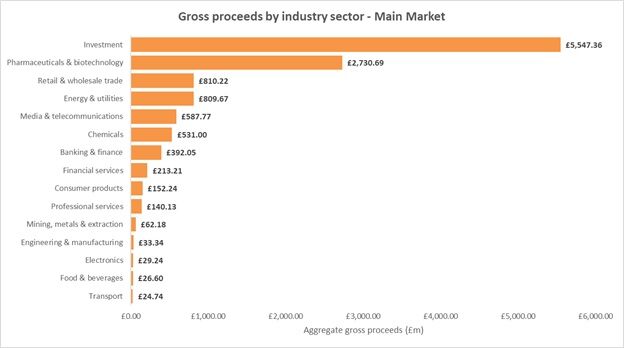 Despite dominating deals by volume, investment companies accounted for a smaller percentage of aggregate gross proceeds raised by Main Market companies in 2019, raising 46% of the total gross proceeds during the year with an average of £88m raised per transaction.

Sector diversity on the junior market 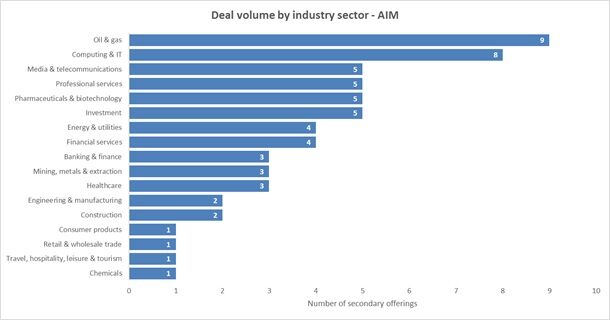 In terms of transaction volume, AIM had a far more varied spread of industry sectors. Oil & Gas, Computing & IT and Media & Telecoms topped the list, industries traditionally associated with AIM. However, investment companies contributed the most by way of gross proceeds raised during the year, with £755.8m in total making up 32% of aggregate gross proceeds in 2019. 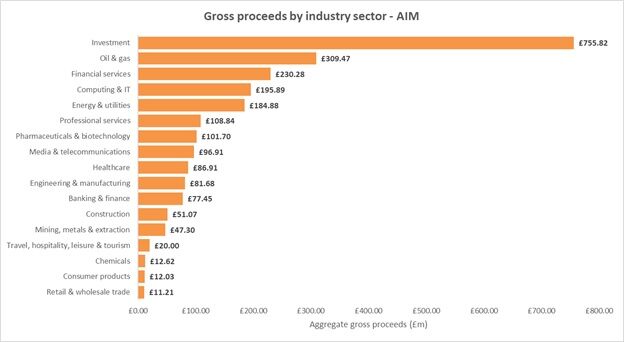