Lexis®PSL Corporate and Market Tracker has conducted research to examine the current trends in UK public M&A for the period 1 July 2019 to 30 September 2019.

Lexis®PSL Corporate and Market Tracker has conducted research to examine the current trends in respect of UK public M&A. Data for this report has been sourced from the Market Tracker transaction data analysis tool which allows users to access, analyse and compare the specific features of numerous corporate transactions. This is an update to our Market Tracker trend report—trends in UK public M&A deals in H1 2019 in which we examined firm and possible offers announced in the first half of 2019.

The percentages included in this report have been rounded up or down to whole numbers, as appropriate. Accordingly, the percentages may not in aggregate add up to 100%.

The final date for inclusion of developments in this report is 30 September 2019. Reference has been made to developments after this date if considered noteworthy. 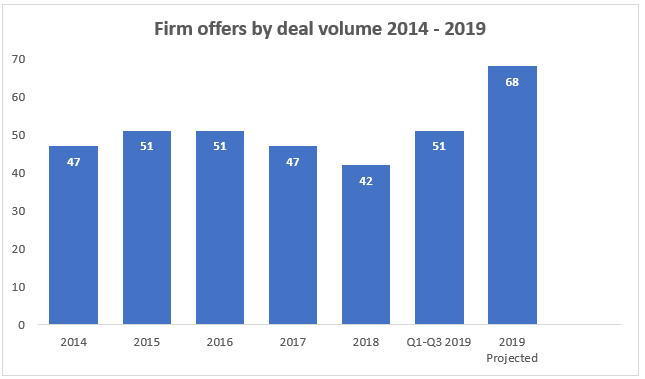 Aggregate deal value was £15.2bn, which represents a slight increase compared with Q3 2018 and Q2 2019 (£14.9bn and £12.4bn respectively). Average deal value was £950m and there were four transactions with deal values exceeding £1bn. The largest transaction was Takeaway.com’s all-share merger with Just Eat, which valued the target company at £4.98bn. While the aggregate deal value in Q3 2019 exceeded those in Q3 2018 and Q2 2019 (£14.9bn and £12.4bn respectively), aggregate deal value in the first three quarters of 2019 (£41.5bn) is at lower levels than in 2018 (£121.8bn) even after adjusting for the shorter period. This is largely attributable to the absence of ‘blockbuster’ transactions of the type seen in 2018 (ie, Takeda’s offer for Shire and Comcast’s offer for Sky, which between them accounted for £75bn of deal value). 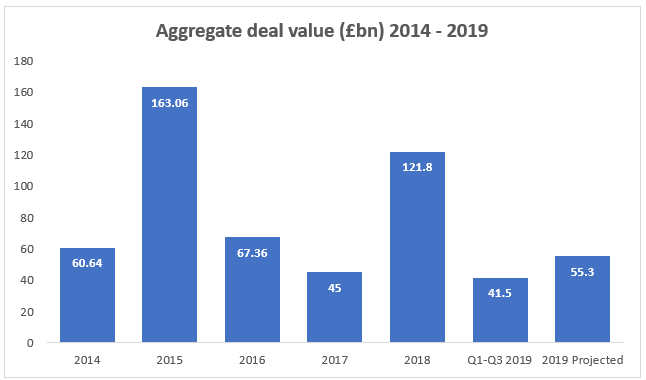 Schemes of arrangement continue to be the preferred deal structure across all deal sizes. This method of structuring an offer made up 75% of all firm offers in Q3 2019, which is similar to the proportion of takeovers structured as schemes in previous review periods in 2018 and 2019.

Of the four offers that were structured as contractual offers, one was a mandatory offer (FFI Holdings offer by 777 Group), one was a partial offer (Aston Martin Lagonda Holdings offer by Investindustrial Advisors) and one was made by a bidder with a 39% interest in the target company at the time of the firm offer announcement (easyHotel offer by Ivanhoe Cambridge and ICAMAP Investments). For these three transactions a scheme structure was either not permitted under the Code or was not a viable structure. This suggests that unless there is a compelling reason to structure a transaction as a contractual offer, the default position across all deal sizes is to structure transactions as schemes. 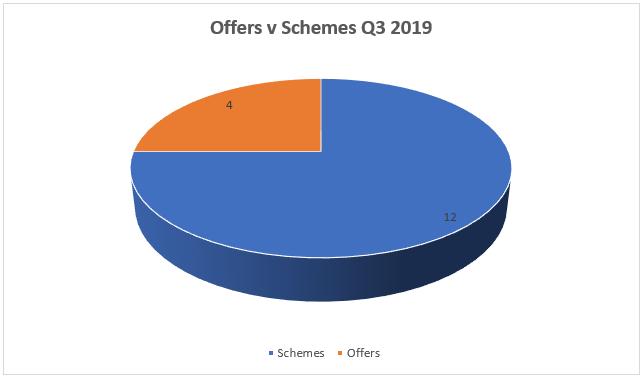 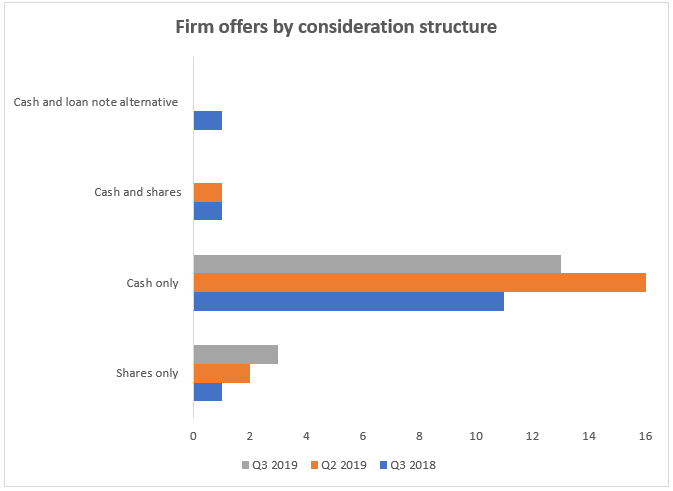 These figures are similar to previous review periods and suggests that healthy corporate balance sheets and the availability of cheap debt continues to drive M&A activity. An interesting feature of Q3 2019 was the proportion (23%) of cash offers that were funded solely by equity subscriptions to bidco/private equity funds. This choice of structure featured predominantly on mid-market P2P transactions and may reflect high levels of private equity fundraising. 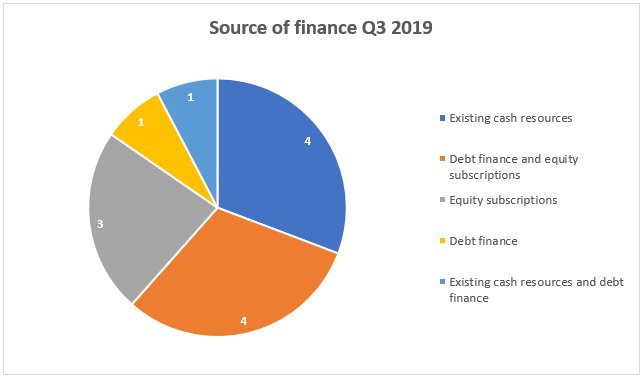 In Q3 2019, there was only one competing bid announced, the possible offers for Eddie Stobart Logistics (Stobart) by DBAY Advisors and TVFB (3).

Both bidders had some pre-existing knowledge of the target company: DBAY Advisors was the majority shareholder in Stobart at the time of its flotation and continues to hold a 10% interest in the company; TVFB (3) is the vehicle of Andrew Tinkler, the former CEO of Stobart Group. For further details, see here.

TVFB(3) withdrew from the bid process on 16 October and on the same date the ‘PUSU’ deadline for DBAY Advisors to clarify its intentions was extended to 28 October 2019. In the meantime a potential competing bid has emerged from Wincanton, which announced on 18 October that it was undertaking due diligence to assess the possibility of a combination with Stobart.

Finally, although outside the review period for this trend report, on 22 October Prosus announced a competing bid for Just Eat.

We will continue to track the progress of these transactions in 2019.

Two of the largest transactions were in the Food & Beverages sector: Takeaway.com’s £4.98bn offer for Just Eat and CK Asset Holdings’ £2.7bn offer for Greene King. 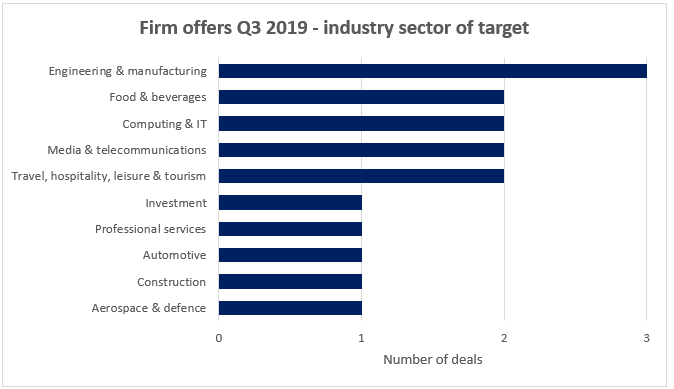 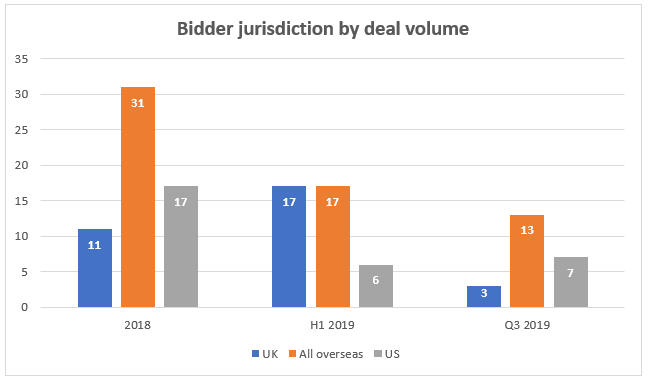 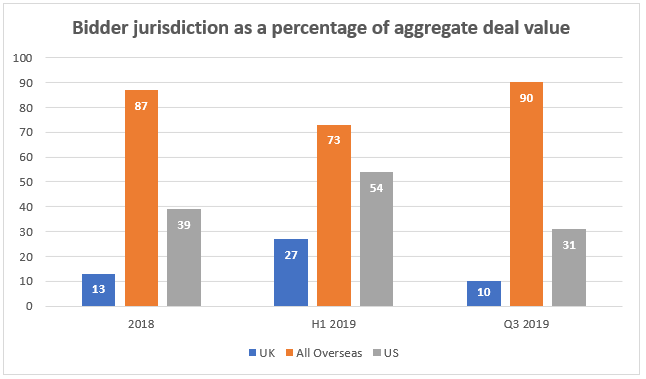 * Includes Aptean which is ultimately controlled by funds managed and advised by Vista Equity Partners and TA Associates.

The largest potential transaction was the Hong Kong Stock Exchange’s £31.6bn cash and shares offer for the London Stock Exchange. This offer lapsed on 8 October after HKSE failed to secure the recommendation of the LSE board. For further details, see here.

Other high-profile transactions include the competing bids for Stobart by DBAY Advisors and TVFB (3), which are discussed in more detail under competing bids above.

One feature of 2019 has been the increased readiness of global regulators to scrutinise transactions. In October 2019, the Competition and Markets Authority (CMA) decided to refer the completed acquisition by JD Sports Fashion of Footasylum for an in-depth investigation. This is the first time the CMA has referred to Phase 2 a completed transaction subject to the Takeover Code since the CMA’s formation in April 2014.

This year has also seen two transactions being investigated on national security grounds, both of which are still ongoing. The first concerns the acquisition of Inmarsat (a UK-based satellite telecommunications company) by a consortium comprising Apax Partners, Warburg Pincus and Canadian Pension Plan Investment Board. The second concerns the acquisition by Advent International (a US private equity firm) of Cobham (a UK aerospace and defence supplier).

This growing trend follows changes made to the UK merger control regime’s notification regime for certain transactions impacting national security which came into force in June 2018 (see further, LNB News 11/06/2018 30). So far, such changes appear to be having the desired effect of catching more mergers in those sectors which might give rise to national security implications.

Finally, on a more general M&A note, it is interesting to highlight that 2019 has seen a notable increase in the number of fines issued for breaches of merger control rules (including gun-jumping/failure to file) around the world, including in the UK (where fines have been issued for breaches of hold separate orders and failures to respond to information requests).