In July 2019, the Department for Business, Energy & Industrial Strategy (BEIS) published its findings on research that had been primarily conducted to address concerns that companies may be carrying out share buybacks (whereby a company  repurchases its own shares) to enhance earnings per share (EPS) and trigger inflated executive pay (BEIS report).

The BEIS report noted that, despite concerns, there was no evidence to ‘suggest that repurchases are being used systematically to artificially hit EPS targets or crowd out investment’. Whilst there was some ‘weaker evidence that firms on course to miss their EPS target conducted more repurchases than those on course to hit it’, no firm succeeded in hitting this target using buybacks. Due to this, it was thought to be difficult to conclude this was the motivation behind the buyback.

The BEIS report looked at the total value of share repurchases from 2007 to 2017 and found that ‘in recent years they have been broadly stable, but have represented a declining share of operating profits for those companies that have repurchased shares’. BEIS found that ‘since the global financial crisis, share repurchase activity in the UK has stabilised, at around 10% of operating profits.’  In its summary, the report concludes that ‘share repurchase activity is both limited and cyclical, responding to economic conditions and market confidence’.

BEIS also carried out research into how share repurchases are viewed by senior company executives, finding that ‘76% of companies indicated that it [repurchases] did not align with their views at all’.

Despite this evidence that the overall number of share buybacks being undertaken are stable or even declining in terms of their overall value, research carried out by Market Tracker indicates a steady increase over the past three years in the number of FTSE 350 companies proposing an AGM resolution for shareholder authority to carry out a buyback, with 95% of companies proposing a buyback resolution during the 2019 AGM season. 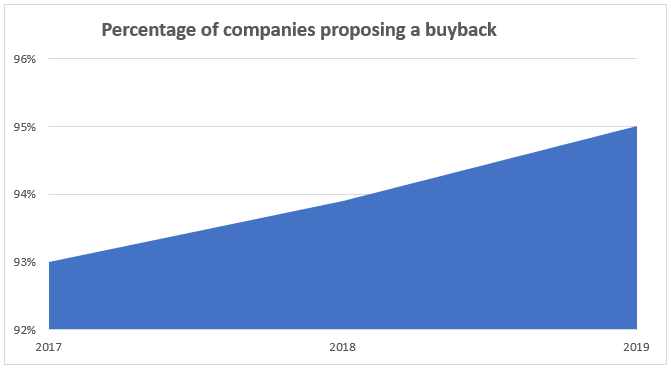 Market Tracker also found that 86.6% of companies proposed an upper limit of 10% of the ordinary issued share capital on the share buyback authority sought at the AGM, in line with the Investment Association guidelines. 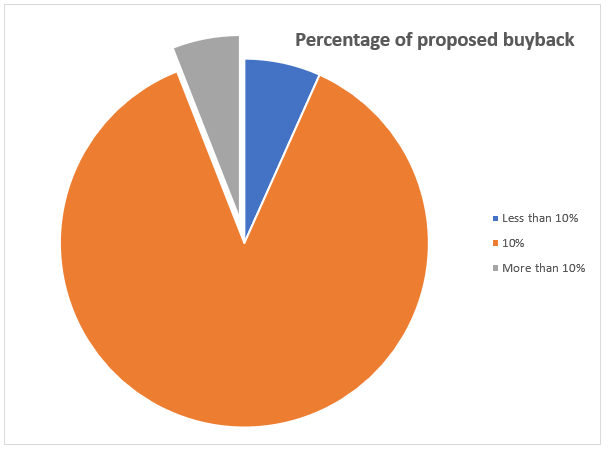 Shareholder advisory consultancy, Pensions & Investment Research Consultants Ltd (PIRC), were among the first to scrutinise share buybacks. In the 2016 issue of their annual shareowner voting guidelines, and in each version issued since then, they recommended that shareholders should vote ‘no’ to a share buyback authority resolution unless the board give them a clear, cogent and compelling case for it. On top of this, the Pensions and Lifetime Savings Association 2019 voting guidelines also state share buybacks should be in the best interest of the company.  Nevertheless, our research indicated that 65% of the companies proposing a buyback resolution provided no reason behind the request for shareholder authority. Of the companies providing a reason, the majority made a generic statement confirming that although they had no current intention to repurchase shares, they required the flexibility to do so.

As seen for many years, usual market practice remains for companies to seek a blanket shareholder authority for 10% of the issued share capital to carry repurchases out when necessary as a matter of course at the AGM, irrespective of whether a buyback is in the pipeline, as opposed to dealing with them on an individual basis.

Market Tracker will take a more detailed look at share buybacks and many other resolutions, disclosures and trends at the AGM in the upcoming 2019 season AGM trend report.