A round up of key developments in corporate transactions covered by Lexis®PSL Corporate and Market Tracker this week, including a summary of the offer for Randgold Resources Limited by Barrick Gold Corporation, an update on the shareholder meeting at Patisserie Holdings plc, an overview of the proposed amendments to the Companies Act and the Takeover Code post-Brexit, and a look at the Gender Pay Gap briefing by the House of Commons. Our focus this week is on returns of value via buyback to shareholders in the mining industry this year.

On 14 September 2018, Canadian incorporated company Barrick Gold Corporation (Barrick) and UK incorporated company Randgold Resources Limited (Randgold) announced a recommended share for share merger to create ‘an industry leading gold company’. The merger was structured as a scheme of arrangement under Article 125 of the Companies (Jersey) Law 1991. On the announcement of the merger, Mark Bristow, Chief Executive of Randgold stated:

‘Our industry has been criticised for its short-term focus, undisciplined growth and poor returns on invested capital. The merged company will be very different. Its goal will be to deliver sector leading returns, and in order to achieve this, we will need to take a very critical view of our asset base and how we run our business, and be prepared to make tough decisions. By employing a strategy similar to the one that proved very successful at Randgold, but on a larger scale, the New Barrick Group will leverage some of the world’s best mines and talent to create real value for all stakeholders.’

On 6 November 2018, Randgold announced a 25% rise in third-quarter net profit in its quarterly report despite industrial action at its Tongon gold mine in Ivory Coast. In the report, chief executive Mark Bristow stated:

‘considering that Tongon only returned to normal in the last month of the quarter, this was an exceptional performance, highlighted by Kibali posting another set of record results, and moving further ahead of plan, while LouloGounkoto also delivered increases across the board.’

The increase in dividends and profits has had a positive impact on the proposed merger between Randgold and Barrick. On 7 November 2018, Randgold shareholders approved the scheme with the requisite majority of scheme shareholders.

Patisserie Holdings conducted a general meeting of shareholders on 1 November 2018, following its trading update and proposed firm and conditional placing to raise capital announcement on 12 October. The company announced the results of the meeting, where the shareholders resolutions were passed.  The shareholders approved the placing, as the funds were required to recapitalise the company, following the loan provided by the company’s chairman Luke Johnson. Existing investors who did not participate in the placing have diluted minority share holdings suspended at 429p.

Patisserie Holdings shares were suspended from trading last month, when the discovery of the company’s accounting irregularities was first reported. This resulted in the resignation of the company’s finance director and company secretary.

The consideration for the acquisition was made up entirely of cash, with $5.25 billion paid at completion and the remaining $5.25 billion to be paid in six equal instalments over the following six months.

On 1 November 2018, BHP announced they would return all of the consideration received for the shale assets (minus tax and expenses) to shareholders. The total of the shareholder return is therefore $10.4 billion and will encompass a share buyback of $5.2 billion and a special dividend of $5.2 billion. The special dividend will be paid in January 2019, allowing the return per share to be calculated following the buyback. 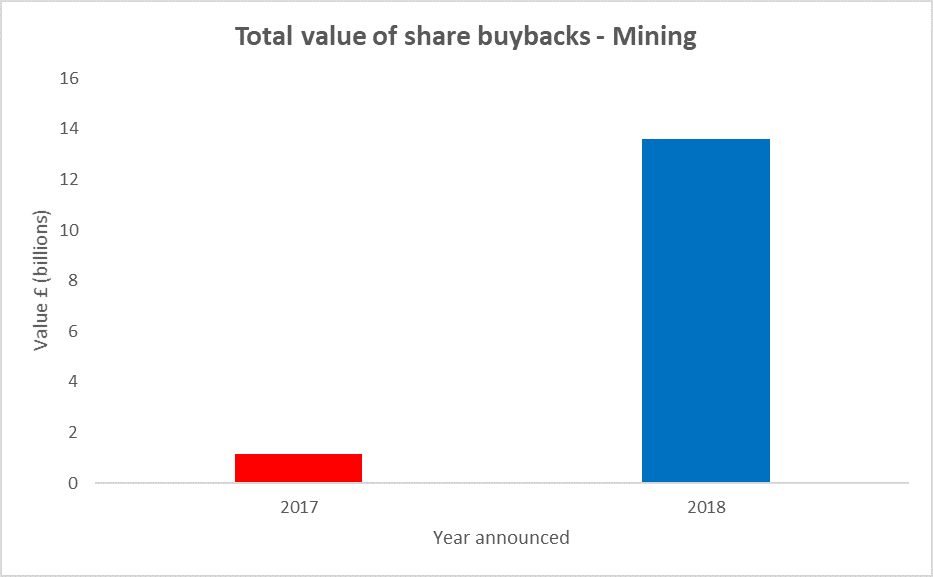 Looking at the seven share buybacks announced in the mining, metals & extraction industry in 2018, six of the share buybacks were carried out by Rio Tinto plc, Glencore plc and BHP Billiton plc, comprising 99.8% of the total value returned to shareholders by mining companies in 2018: 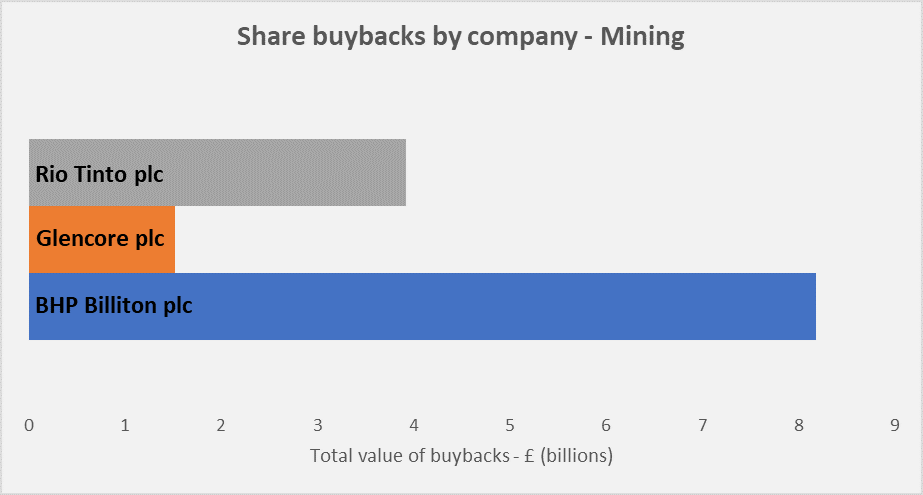 A public company should carefully consider its reasons for undertaking a share buyback and whether they are valid and comply with institutional investor guidance. The Share Capital Management Guidelines of the Investment Association (IA) note that dividends remain the preferred method for regular distributions to shareholders and that a company should only exercise a general authority to carry out a share buyback if it is in the best interests of shareholders generally. In addition, the IA expects a company to disclose in its next annual report the justification for any share buybacks made in the previous year, including an explanation of why this method of returning capital to shareholders was decided upon. In this context, a company should discuss the effect that the share buybacks have on earnings per share (EPS), total shareholder return (TSR) and net asset value (NAV) per share. Presumably aware of this institutional investor guidance, Glencore’s CEO, Ivan Glasenburg, has stated that “right now… buybacks are the best returns we can get for the company”. For further information see Public company share buybacks—initial considerations (a subscription to Lexis®PSL Corporate is required).

Nevertheless, the quantity and value of the shares being bought back by mining companies has attracted criticism, with claims that share buybacks demonstrate a lack of foresight and ambition. Rather than using excess capital to fund buybacks, either from profits or disposals, it might be argued that companies instead should focus on investing those funds to ensure growth and future financial success. When considering BHP, who have returned a significant sum, assets which were previously revenue generating have not been replaced.

Market Tracker, in their forthcoming 2018 AGM Trend Report, will be considering the latest data in relation to share buybacks by FTSE 350 companies. In 2017 some 93% of companies in the survey proposed share buybacks.

The Companies (Cross-Border Mergers) Regulations 2007 are also being revoked as after exit day the UK will no longer have access to the regime designed for mergers to occur between EEA States. For more detail on this story, see our news analysis: Government publishes instrument to amend Companies Act regime post-Brexit (a subscription to Lexis®PSL is required).

The Code Committee of the Takeover Panel (Code Committee) has published a consultation on proposed amendments to the Takeover Code (Code) in relation to the withdrawal of the UK from the EU (PCP 2018/2). The deadline for sending comments is 17 December 2018.

Comments to PCP 2018/2 may be sent by email to: supportgroup@thetakeoverpanel.org.uk or in writing to: The Secretary to the Code Committee, The Takeover Panel, 10 Paternoster Square, London, EC4M 7DY. For more on this story, see our news analysis pieces: Code Committee proposes amending the Takeover Code for Brexit and

Analysing the proposed amendments to the Takeover Code arising from Brexit (a subscription to Lexis®PSL is required).

The House of Commons has published a briefing paper this week providing statistics on the gender pay gap in the UK. It looks at the size of the gender pay gap and how this has changed over time. The report also suggests reasons behind why a gender pay gap exists, with motherhood unsurprisingly emerging as a key contributory finding in the report. The report focuses on age, occupation, industry, region, the difference between public and private sector and the gap between higher paid and lower paid employees.

For an online tutorial on how to use Market Tracker, please see the four video demonstrations below, which look at different aspects of the product:

The written user guide to MT is also available and can be accessed via Lexis®PSL Corporate (a subscription to Lexis®PSL is required).