A round up of key developments in corporate transactions covered by Lexis®PSL Corporate and Market Tracker this week, including a cancelled fundraising by Impact Healthcare REIT, IPO announcements from brokerage firm finnCap Limited and litigation funder Manolete Partners, and a trend report on rights issues in 2018.

On 30 November 2018, Impact Healthcare REIT (Impact)  postponed its fundraising plans, following its announcement on 24 October of a possible fundraise of £150 million. Impact had intended to use the proceeds of the fundraise to acquire a portfolio of assets, specifically UK care homes. Its announcement confirmed that it had ‘decided not to exchange contracts on the acquisition of the Target Portfolio during 2018, and therefore will not proceed with an equity fundraising prior to the year-end’. Impact stated that they would explore further fundraising options in 2019.

Volatile market conditions have contributed to several poor performing IPOs in recent months, and REITs have been a particular casualty of postponed flotation plans in 2018. Most recently, The Multifamily Housing REIT postponed plans to list at the beginning of November. It appears that political instability caused by Brexit has contributed to uncertain market conditions, although no company has directly cited this as a factor in its announcement. However, this is the first instance of a REIT postponing a fundraise, rather than a listing.

In contrast, Smithson Investment Trust performed well in its oversubscribed IPO last month, raising a record £822 million in proceeds. Unconfirmed rumours suggest that it may qualify for promotion to the FTSE 250 index following the quarterly review this month. Similarly, despite a rocky start to trading for Aston Martin and Funding Circle, both companies are tipped to join the ranks of the FTSE 250 at the end of this year.

Brokerage firm finnCap limited has announced plans to buy Cavendish Corporate Finance and float the combined group on AIM.  finnCap currently acts as a financial adviser or broker to 125 quoted companies. The combined group aims to raise £7m by going public, with shares priced at 28 pence each, and expects an overall market capitalisation of £47 million.

Many of the UK’s brokers are subject to the change in regulation under MiFID II, which came into force in January 2018. As part of these changes, fund managers are required to pay separately for investment research and trading. As a result, several fund managers have reduced the research that they receive and certain firms have sought to consolidate their services. On 18 October,  SP Angel and Northland Capital announced that they had entered possible merger talks. In September 2018, Banco Santander were mulling over the acquisition of Peel Hunt.

Manolete Partners has conditionally raised £16.3 million from a placing of new and existing shares. Admission is expected on 14 December 2018, with the company expecting a market capitalisation of £76.3 million. If the flotation completes, the company will be the second litigation funder to go public in the UK, following on from Burford Capital in 2009. 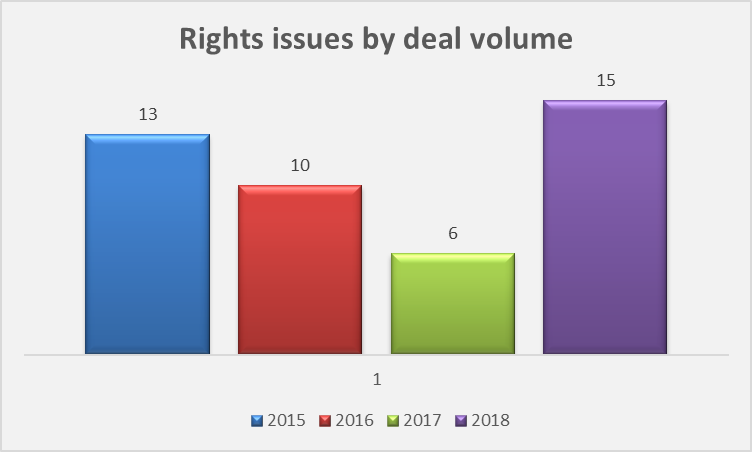 Three rights issues were announced in November, bringing the total for 2018 to 15, the highest volume for this transaction type in the last four years. This type of fundraising had been experiencing a steady decline from 2015. However, the number of rights issues in 2018 has increased by 150% since 2017.

Kier Group plc (Kier) announced a £264 million rights issue on 30 November, stating that the net proceeds would be used to ‘accelerate its debt reduction programme and increase the strength of its balance sheet’. The announcement estimated the group’s net debt at around £624 million at the end of October, a substantial increase from the £187.5 million reported four months earlier.

Kier noted in in its announcement of the rights issue that the risks associated with its outstanding debt had recently increased, citing the fact that ‘a number of lenders have indicated an intention to reduce their exposure to the construction and related sectors’ as a key contributing factor to the decision to proceed with the fundraising. Yet despite reasonable justifications, there remains a sense of urgency behind the transaction. The importance of the proceeds being reported on the group’s balance sheet by 31 December was emphasised by Kier’s directors. Although the rights issue has already received support from 32% of the company’s shareholders, Kier’s shares dropped from 752.5 pence per share to 505 pence per share once news of the rights issue hit the market.

On 14 November, Grainger plc (Grainger) announced a £346.7 million rights issue of 194,748,913 new ordinary shares at 178 pence per share, representing a deep discount of 39% to the closing price of 291 pence on 13 November. There are no regulatory limits on the size of the discount at which new shares can be offered in a rights issue (in contrast with non-pre-emptive issues, like placings). The rights issue will be fully underwritten by Numis Securities and JP Morgan Cazenove and will be used to part fund the acquisition of GRIP REIT plc (GRIP) from Grainger’s joint venture (JV) partner, APG, for £396 million.

In its annual report, Grainger note a significant increase in the number of people renting in the UK and predict that that the acquisition, which will increase its presence in the private rented sector market, will provide enhanced returns to shareholders. These assurances should provide some comfort to shareholders in light of the discounted cash call.

In contrast, the announcement by The Restaurant Group (TRG) that it plans to acquire Wagamama, amid a turbulent market for casual dining, has been more controversial. On 12 November, TRG confirmed plans to carry out a fully underwritten 13 for 9 rights issue to raise gross proceeds of approximately £315 million to part fund the acquisition. The issue price, which is deeply discounted at 56.9%, has been set at 108.5 pence per new ordinary share.

Rights issues can be unpopular with investors as the discounted issue price can drag the market price down. TRG’s share price dropped from 297.2 pence per share on 29 October, before the announcement of the acquisition, to a low of 226.6 pence per share on 13 November following the confirmation that the rights issue would take place. Shareholder reactions to the TRG acquisition and rights issue have been mixed. On their website, J O Hambro Capital Management, at that time holding 7.86% of share capital, stated:

‘Announcing a deal of this size and ambition in the UK leisure space was never going to be easy in current market conditions. There is, as a result, much current debate and concern over the deal, some justified, some a little overstated. We are gobsmacked by the level of negative headlines this deal has created. We will take no further part in the debate. We support the deal.’

Both the rights issue and acquisition were approved by shareholders at a general meeting on 28 November. However, the proposals received significant opposition from shareholders, with almost 40% of shareholders voting against the resolutions.

Rights issues continue to be the choice for high-grossing fundraisings, averaging around £454 million per transaction in 2018, in comparison to an average £19.5 million per transaction for placings and open offers. This is despite the longer timetable associated with a rights issue and the fact that an FCA approved prospectus is typically required to be published which increases cost and administrative burden.

With the exception of Provident Financial and Sequoia, the largest fundraisings in 2018 were all in connection with an acquisition. This builds on the trend we witnessed in our Rights Issues Trend Report in 2015, where we predicted an increase in rights issues to fund large acquisitions after the ABI referred to rights issues as its ‘preferred structure for large dilutive fundraisings’. 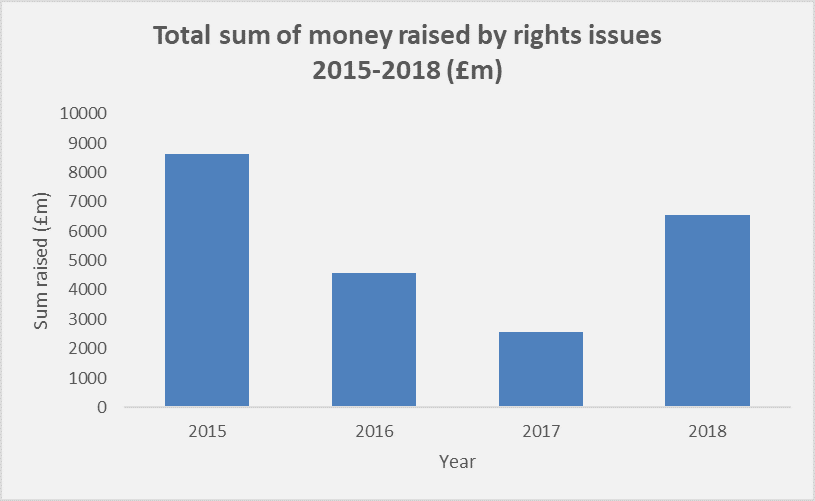 The Quoted Companies Alliance (QCA) and UHY Hacker Young have published a joint report analysing the corporate governance disclosures of 50 AIM companies, in order to identify patterns and examine the impact of the AIM rule 26 change this year. Key findings include that companies need to take greater positive action in communicating with their shareholders and other stakeholders. Overall, the report found that the new rule has resulted in better corporate governance, but further progress can still be made. The report also outlines ‘five top tips’ for AIM company boards to follow. For more on this story see our news article: QCA publishes corporate governance behaviour review 2018/19 - (a subscription to Lexis®PSL Corporate is required).

PS 2018/19 sets out the ruling of the Chairman of the Hearings Committee (Committee) and the reasons for ruling against Mr King’s request to convene a Committee meeting under Rule 2 of the Procedure of the Committee to review a ruling of the Panel Executive which confirmed that Mr King’s obligation to procure a mandatory offer for Rangers’ shares under Rule 9.1 of the Takeover Code extended to the holders of new shares issued during the offer period. For more on this story see our news article: Hearings Committee publishes Rangers and King ruling - (a subscription to Lexis®PSL Corporate is required).

The Financial Conduct Authority (FCA) has published its EU Withdrawal Impact Assessment, which was requested by the Treasury Select Committee and sets out the impact of the Withdrawal Agreement and future framework on the FCA's objectives. Andrew Bailey, FCA Chief Executive, has also written to Nicky Morgan MP, Chair of the Treasury Select Committee. For more on this story see our news article: FCA assesses impact of EU Withdrawal Agreement - (a subscription to Lexis®PSL Corporate is required).