A round up of key developments in corporate transactions covered by Lexis®PSL Corporate and Market Tracker this week, including a summary of the possible offer for Independent Oil and Gas by Rockrose Energy and a look at the volume of secondary offers in 2018.

On 1 March 2018, oil and gas company RockRose Energy plc (RockRose) made a possible all cash offer for the entire issued and to be issued share capital of Independent Oil and Gas plc (IOG). The possible offer has been valued at £26.6 million with 20 pence for each IOG share. If made, it would represent a premium of 51% to the closing price of IOG on 26 February.

RockRose announced that, on 21 March 2019, it had made a formal approach to Smith & Williamson LLP (acting as joint administrators for LOG) to acquire the entire debt due to LOG from IOG, with accrued interest, for the sum of £40 million in cash after making initial and enhanced offers to the Administrators on an informal basis during the past 10 days.

Andrew Austin chairman of RockRose commented ’The continued lack of clarity and failure of IOG (and its direct and indirect lenders, both now in administration) to disclose the key terms of its indebtedness and the very material extent of the dilutive instruments is unusual in the current circumstances. We sincerely hope and expect that both the LCF administrator will provide feedback on our offer and that IOG will take steps to make full disclosure of the position of the dilutive instruments’.

IOG responded that the debt offer made by RockRose could not reasonably be described as ‘fair and generous’. Instead, ‘it demonstrated RockRose's intention to acquire the loans at substantially below not only their fundamental value but also at a substantial discount to the see-through value of the already opportunistic possible offer, to the detriment of the creditors of LOG and London Capital and Finance plc, while exploiting the unfortunate circumstances of holders of minibonds’.

The board of IOG has unanimously rejected the offer for debt and continues to focus its efforts on unlocking additional value for all IOG stakeholders by securing a farm-out partner for its core project to provide funding optionality, in parallel with advancing IOG's stated capital markets funding plans.

In focus: Fundraising on the London Stock Exchange in 2018

Lexis®PSL Market Tracker reviewed a total of 169 secondary offerings on AIM and the Main Market during 2018, the scope of which included all offers for subscription, placings, placing and open offers, and rights issues raising in excess of £10 million in gross proceeds for the company. The research has been conducted as part of our upcoming ECM Trend Report, which analyses IPOs and secondary offers over the last year, reviewing key developments and identifying emerging trends in market activity.

In the bulletin this week, we focus on transaction volume in 2018, with a comparison to deal flow in the past two years. Transaction volume decreased in 2018 on both AIM and the Main Market, following a relative peak in activity in 2017. In respect of combined market activity, we reviewed a total 169 transactions in 2018, a decrease of 14.2% on the 197 secondary offers during 2017 and a return to the volume seen in 2016, where we found a combined total of 170 secondary offers. 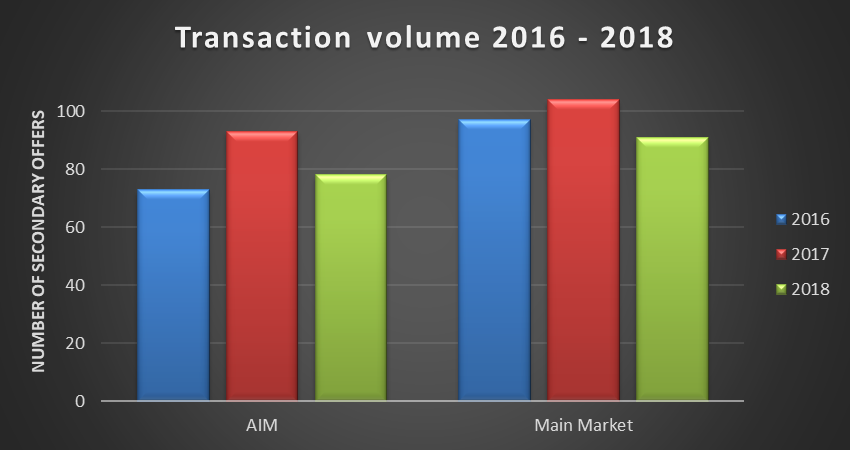 Deal activity on AIM played a large part in sustained transaction volume during 2018. There were 78 secondary offers on AIM within the scope of our research. Although this represented a decline of 16.1% from the 93 secondary offers in 2017, this was a 6.8% increase on activity in 2016. In contrast, 2018 saw the lowest activity levels over a three-year period on the Main Market, with 91 secondary offers representing a 12.5% decrease in volume when compared to 2017, and a slighter yet measurable decline of 6.1% in comparison to 2016.

Our upcoming trend report will look in more detail at secondary offerings across a three-year period and will be published later this year.

ESMA publishes the first Q&As relating to the Prospectus Regulation

The European Securities and Markets Authority (ESMA) has published a new document containing nine Q&As relating to Regulation (EU) 2017/1129 (the Prospectus Regulation). ESMA is publishing these Q&As in a new document in order to separate them from the Q&As published in relation to the Prospectus Directive. The purpose of these Q&As is to promote common supervisory approaches and practices in the application of prospectus supervision. These Q&As are also intended to facilitate market parties by providing guidance as to how national competent authorities will interpret the Prospectus Regulation.

The Q&As provide clarification on the following issues in relation to the Prospectus Regulation:

According to ESMA, the Q&As relating to the first two issues are particularly important. These Q&As should help market parties effectively manage the transition from the Prospectus Directive to the Prospectus Regulation, by:

The Q&As relating to the third issue above are also quite important. These Q&As will help to clarify this process, which is fundamental to the proper working of the Prospectus Regulation.

The Financial Reporting Council (FRC) has issued a consultation on its Draft Plan and Budget for 2019/20, including details of the FRC’s strategic priorities and projects for 2019/20.

• the FRC’s transition into a new authority, to be called the Audit, Reporting and Governance Authority (ARGA)

• consulting on revisions to the FRC’s Guidance on Risk Management and Internal Control and Related Financial and Business Reporting, including on the future of the viability statement and enhancement to reporting

• taking forward the proposal made in Sir John Kingman’s independent review of the FRC (Kingman review) to extend the FRC’s corporate reporting review process to the entire annual report, including the corporate governance statement

• consulting on Ethical and Auditing Standards during the summer of 2019—subject to the outcome of the consultation, the new standard will apply to the audit of financial periods beginning on or after 15 December 2019

• following Brexit, expanding the FRC’s registration and inspection activities of third country auditors and reviewing with the EU and other countries an equivalence regime for the registration of auditors

The Business, Energy and Industrial Strategy Committee (BEIS) has published a report on the differences between top bosses pay and the rest of their workforce. BEIS believe that companies need to do more to link bosses pay with their employees' pay and that the large difference in pay is ‘baked’ into the pay system. According to the report, a reliance on incentive-based executive pay, that is often supported by remuneration committees that design pay packages, is the root cause of the large executive pay packages. Over the last ten years, chief executives’ earnings in the FTSE 100 have increased four times as much as national average earnings. Alexandra Carn, partner at Edwin Coe LLP, says that ‘pay structures, particularly at the top end, are notoriously opaque and any measures that provide transparency on pay are bound to be welcomed by employees.’ For more on this story see our news article: Calls for bosses pay packages to be brought in line with employee pay ‘welcomed’ - (a subscription to Lexis®PSL is required).

The Takeover Panel has published Instrument 2019/2 (the Instrument), which makes two amendments to the Takeover Code (the Code). First, following the announcement by the Financial Conduct Authority (FCA) that it will no longer be using the name ‘UK Listing Authority’ or ‘UKLA’, the Instrument amends references to the ‘UKLA’ and the ‘UKLA Rules’ so as to refer to, respectively, the ‘FCA’ and the ‘FCA Handbook’. Second, the Instrument makes minor amendments to Note 2 on Rule 9.1 (Collective shareholder action). The amendments will take effect on 1 April 2019.

The amendments to the Code made by the Instrument have either been made due to changes to legislation or do not materially alter the effect of the provisions in question. As a result, the amendments were made without formal consultation.