A round up of key developments in corporate transactions covered by Lexis®PSL Corporate and Market Tracker this week, including an IPO by uranium producer Kazatomprom, a potentially postponed IPO by ECI Telecom Limited and a mini trend report on gender diversity in the mining sector.

Kazakhstan has been the world’s leading uranium producer since 2009, with around 39% of the world’s uranium resources. Kazatomprom is Kazakhstan’s national atomic company and controls all uranium exploration and mining as well as other nuclear-related activities. The Kazatomprom IPO is the second listing this year to take advantage of an increase in uranium prices since 2016. Yellow Cake plc, a company set up to allow investors the opportunity to invest in the long-term performance of uranium, listed on AIM in May 2018. Incidentally, Yellow Cake have entered into a long-term uranium supply agreement with Kazatomprom for the next 9 years.

The Kazakh sovereign wealth fund Samruk-Kazyna, which is wholly-owned by the government of Kazakhstan, sold 15% as part of the flotation, retaining 85% of the company’s share capital. The shares were sold in the form of global depositary receipts (GDRs). Kazatomprom outlined an initial price range of $11.60-$15.40, subsequently pricing the receipts at the lower end of the range. At the close of trading on the first day of admission to the LSE, the company’s GDRs were trading at $12.00, 3.4% above the issue price.

The sale is the first in a series of privatisations in Kazakhstan. State-run oil and gas company KazMunaiGas is reportedly in the process of finalising plans for an IPO that could raise up to $6.5bn. Kazatomprom’s major shareholder Samruk-Kazyna is also the largest shareholder in KazMunaiGas, controlling 90%, with the other 10% controlled by the National Bank of Kazakhstan.

On 27 September 2018, the Israeli company ECI Telecom Group Limited (ECI) announced plans to float on the Main Market of the London Stock Exchange. Admission of the shares to trading was expected in October. A registration document was published on 20 September 2018, outlining the company’s aim to raise $230 million through the IPO.

ECI have yet to release a prospectus or any further information relating to the float, and it appears that the IPO may have been postponed.

ECI provides networking and data transport products and had intended to use the proceeds from the IPO to purchase preferred shares issued by its ECI Telecom Ltd subsidiary as well as to reduce debt and increase its brand profile. It is the latest company to put their IPO plans on hold in recent months, indicating tough market conditions for companies planning to list. For more on this emerging trend, see our bulletin story: Uncertain market conditions lead to further cancelled IPOs

In focus: Diversity in the mining sector

‘While the business case for diversity and inclusion is widely recognised and many mining companies have begun to change the way in which they approach this issue, change across the sector as a whole has been slow. Complacency appears to be the biggest challenge and without a deliberate goal of prioritising diversity and inclusion as making good business sense, the pace of change is unlikely to improve.’

The comments reflect the findings in the recently published third Hampton-Alexander report, which cited mining companies Fresnillo, Randgold Resources and Glencore among the top 10 worst performing FTSE 100 companies in terms of female representation in combined executive committee and direct reports.

Fresnillo was identified as one of 5 FTSE 100 companies with an all-male executive committee. In the FTSE 250, Hochschild Mining was featured in the list of the top 10 companies in need of improvement in relation to female representation on the combined executive committee and direct reports, and was cited by the report as having ‘made no progress in the year’. 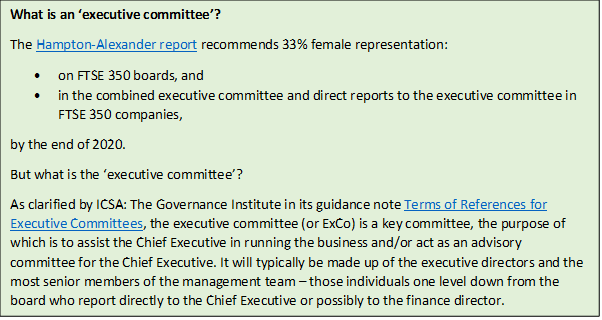 With regard to women holding a board position, mining company Antofagasta made the list of the top 10 worst performing companies in the FTSE 100, with only 18.2% women on the board. In its Annual Report, the company stated that:

‘A Diversity and Inclusion Strategy has recently been approved by the Board to increase the Group’s capacity to attract and advance the progress of women ... In 2017 women represented 9% of the mining division’s workforce, of whom 58% were supervisors or above and 10% held senior management roles. There are two female Board directors and one Vice President’. ( Antofagasta plc - Annual Report, p. 59)

Market Tracker has conducted research on gender diversity across all sectors in the FTSE 350 in its upcoming AGM Season 2018 Trend Report, to be published later this month. The results of the Hampton-Alexander report echo our own findings of limited gender diversity in the mining sector.  Of the 14 mining companies we looked at in the FTSE 350, only one company, Randgold Resources, had exceeded the voluntary target of 33% women on the board, with 3 women out of a total 8 board members. Despite exceeding the target, all the female directors at Randgold were non-executives, and as mentioned above, the company had also performed poorly with regard to female representation across its senior leadership team.

We found that four FTSE 350 mining companies, Polymetal, KAZ Minerals, BHP Billiton and Rio Tinto, had achieved between 25 and 33% female representation on their boards. But again, none of these companies had any female executives appointed to the board. 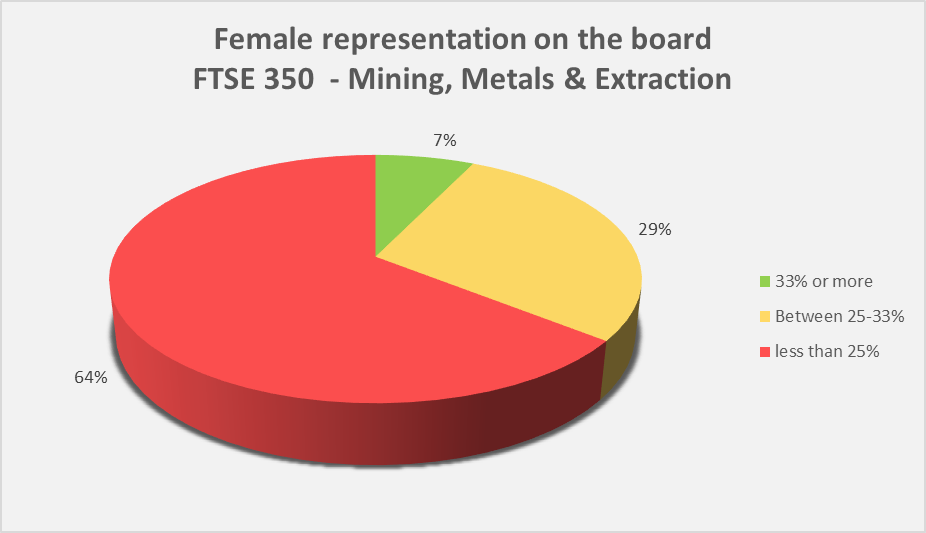 Six of the 14 FTSE 350 mining companies had only 1 woman appointed to the board. Glencore referred to the ‘challenge’ of finding women in the mining sector in its Annual Report, a comment cited by the Hampton-Alexander report as one of the ‘Top 10 excuses’ given by companies for not appointing women to the board:

‘Historically, certain sectors have attracted a considerable number of career women while others – such as mining and commodities – have not. Even today we find it challenging to fill positions in remote mining locations and for the marketing of commodities by women.’ (Glencore plc - Annual Report, p. 90).

Evraz plc also referred to the lack of women in the industry, albeit with a slightly more positive outlook:

‘The Nominations Committee and the Board are committed to meeting best practice standards in gender diversity. The nature of the steel and mining industries makes this more challenging but does not diminish the committee’s and the Board’s commitment.’ (Evraz plc - Annual Report, p. 125)

BHP Group (formerly BHP Billiton plc) has taken a proactive approach to redressing the gender balance. In its Annual Report, the company announced an ‘aspirational goal to achieve gender balance globally’ by 2025, setting itself a target of increasing the female representation across the company by 3% per year and referring to initiatives to improve flexible working policies, to promote gender diversity in internal and external branding and to mitigate potential bias. We will be looking with interest at whether such initiatives will become more common amongst FTSE 350 companies as we get closer to the 2020 deadline for the voluntary Hampton-Alexander targets for gender diversity, particularly in sectors like mining which are traditionally ‘male-dominated’.

The government has published explanatory information in relation to the Draft Official Listing of Securities, Prospectus and Transparency (Amendment) (EU Exit) Regulations 2019, which will set out the proposed amendments to retained EU law related to securities, prospectuses and transparency requirements, to be laid under the EU (Withdrawal) Act.

Institutional Shareholder Services (ISS) has published updates to its EMEA Proxy Voting Guidelines, which apply to shareholder meetings on or after 1 February 2019. The guidelines form the basis of ISS’s benchmark vote recommendations for companies listed in the UK and Ireland. For more on this story see our news article: ISS publishes updates to its EMEA Proxy Voting Guidelines - (a subscription to Lexis®PSL Corporate is required).

The Financial Reporting Council (FRC) has issued a post implementation review of the 2016 changes to ethical and auditing standards. In particular, the review will look at what the impact of the changes has been on auditor independence, prevention of conflicts and on audit quality. For more on this story see our news article: Financial Reporting Council reviews 2016 Ethical and Auditing Standards - (a subscription to Lexis®PSL Corporate is required).

Shareholder proxy adviser, Glass Lewis, has updated its UK corporate governance policy guidelines, which are primarily based on the FRC’s UK Corporate Governance Code. Key areas in which the guidelines have been updated include:

For more on this story see our news article: Glass Lewis updates corporate governance policy guidelines - (a subscription to Lexis®PSL Corporate is required).

The government has published explanatory information on the Draft Market Abuse (Amendment) (EU Exit) Regulations 2018 which will set out the proposed amendments to EU retained law related to market abuse, to be laid under the EU (Withdrawal) Act.