A round up of key developments in corporate transactions covered by Lexis®PSL Corporate and Market Tracker this week, including recent developments in relation to budget airline FlyBe, an update on the Takeover Panel’s ruling on the possible offer by Berry Global Group, Inc. for RPC Group plc and a look at references to artificial intelligence in transaction documents.

Flybe plc (Flybe) has received increased press attention since the announcement of its strategic review and formal sale process on 14 November 2018. The constructive strategic review came about as the result of the well-documented challenges facing the airline industry.

‘the industry is suffering from higher fuel costs, currency fluctuations and significant uncertainties presented by Brexit. We have been affected by all of these factors which have put pressure on short-term financial performance. At the same time, Flybe suffered from a number of legacy issues that are being addressed but are still adversely affecting cashflows.’

Prior to Flybe putting itself into an offer period, it had received a possible offer from Stobart Group plc on 22 February 2018. The offer was terminated on 22 March 2018, with Stobart stating that the parties had been unable to reach agreement on satisfactory terms. Not long after it entered the formal sale process, Flybe received a possible offer from Virgin Atlantic Airways Limited on 23 November 2018.

Stobart and Virgin Atlantic agreed on the terms of a joint venture, Connect Airways Limited, together with DLP Holdings S.à.r.l., a Luxembourg company wholly-owned by funds managed by Cyrus Capital Partners LP. A firm offer was made via Connect Airways Limited on 11 January 2019, valuing the company at £2.2 million with a consideration of 1 pence per share. The terms of the acquisition included a commitment to provide Flybe with a £20 million bridge loan facility to support its ongoing working capital and operational requirements.

Flybe’s major shareholders have expressed discontent with the offer, stating that it undervalues the company. Hosking Partners LLP, Flybe’s largest shareholder, has put forward proposals to remove Chairman Simon Laffin. Andrew Tinkler, the company’s second major shareholder, offered the company a contingency proposal to replace the funding provided by Connect Airways Limited on the condition that the acquisition does not complete. However, the board responded that ‘it continues to regard the arrangements entered into with Connect Airways as being the only viable option available to the Company which provides the security that the business needs to continue to trade successfully,’

Flybe reiterated its commitment to the deal with Connect Airways on 20 February, when it rejected an offer of £65 million at 4.5p a share from Tinkler, aviation investment specialist Bateleur Capital and Arizona-based Mesa Airlines.

Market Tracker will continue to monitor developments in this transaction.

On 23 January, RPC Group plc (RPC) agreed terms with Rome UK Bidco Limited, a wholly owned subsidiary of Apollo Global Management, LLC (Apollo), to acquire its entire issued and to be issued ordinary share capital. The offer followed months of negotiations that began in September 2018 and saw the deadline to make a firm offer extended five times. The final offer, structured by way of a scheme of arrangement, valued the company at £3.323 billion.

Following this, on 31 January, Berry Global Group, Inc. (Berry) announced that it was considering a possible competing cash offer for RPC. RPC confirmed its plans to engage with Berry in accordance with its obligations under the Code and in order to advance discussions in the interests of delivering best value to shareholders.

On 19 February, the Takeover Panel ruled that as Apollo had agreed terms with RPC and the scheme document was published and expected to be effective in the second quarter of 2019, Berry must announce its intention to either make a firm offer or terminate its offer by 13 March 2019. However, if a third party announces a firm offer for RPC this deadline will cease to apply. In its statement, the Panel confirmed that each of RPC, Rome and Berry accepted this ruling.

An increase in shareholder rebellions over FTSE100 pay and the re-election of directors in the 2018 AGM season has placed 120 companies on the Investment Association’s (IA) Public Register. By the end of July 2018, the IA saw a 9% increase in companies experiencing shareholder dissent, compared to 110 companies in the same period in 2017, while a total of 237 individual resolutions were added to the Public Register in 2018, up 25% from 2017.

These findings correspond with our conclusions in the Market Tracker AGM Season 2018 Trend Report, which covered all FTSE 350 companies except for closed-ended investment companies with financial year ends between 1 April 2017 and 31 March 2018. Across our data set we found that the most commonly opposed resolutions related to director re-election, accounting for 33.3% of all resolutions attracting significant opposition. Shareholders also commonly opposed resolutions relating to the directors’ remuneration report, with 20.7% receiving significant dissent.

The Department for Business, Energy and Industrial Strategy (BEIS) has published the terms of reference for the independent review by Sir Donald Brydon into the quality and effectiveness of the UK audit market. The review, launched in December 2018, will explore audits as a product and what they should be in the future, as well as addressing the audit expectation gap.

Sir Donald Brydon is expected to submit his report to BEIS by the end of 2019, following which the government will consult on its response to the review’s recommendations. For more on this story see our news article: Terms of reference of Brydon review of UK audit market announced - (a subscription to Lexis®PSL is required).

The European Commission has launched an outreach campaign to assist EU businesses that want to continue trading with the UK after Brexit. The campaign is part of the Commission’s efforts to ensure that EU businesses don’t suffer any significant disruptions in the event of a no deal scenario.

DCMSC calls on tech companies to exercise duty of care

On 18 February 2019, the Digital, Culture, Media and Sport Committee published its final report on disinformation and fake news in which it recommended, among other things, that the CMA should conduct a ‘comprehensive’ audit of the advertising market on social media and investigate whether Facebook has been involved in anti-competitive practices as well as conducting a review of Facebook’s business practices towards other developers, to decide whether Facebook is unfairly using its dominant market position in social media to decide which businesses should succeed or fail.

In particular, the report outlines evidence obtained from the Six4Three court documents, which highlighted that Facebook was willing to override its users’ privacy settings in order to transfer data to some app developers, to charge high prices in advertising to some developers, for the exchange of that data, and to starve some developers—such as Six4Three—of that data, thereby causing them to lose their business.

Damian Collins MP, chair of the DCMS Committee, summarised the report, noting that ‘The big tech companies are failing in the duty of care they owe to their users to act against harmful content, and to respect their data privacy rights.’ Shadow Culture Secretary, Tom Watson, agreed with the main point of the report, stating that ‘[The] era of self-regulation for tech companies must end immediately’. For more on this story see our news article: UK: Calls for CMA to conduct ‘comprehensive audit’ of the advertising market on social media - (a subscription to Lexis®PSL is required).

In focus: the rise of AI references in transaction documents

Artificial Intelligence, or AI, is one of the most exciting technological developments in recent times. At its essence, it is the simulation of activities usually requiring human intelligence and it has the potential to reduce the need for human input in a range of activities from data processing to robotic tasks.

Market Tracker noted a steady increase over the last three years in companies considering the concept of AI in transaction documents. The majority of these were unsurprisingly concentrated in Computing & IT, with just over 20% of the companies referencing AI based in this sector. Financial services and investment companies were the next most likely to refer to AI, with 14% and 9% based in these sectors respectively. 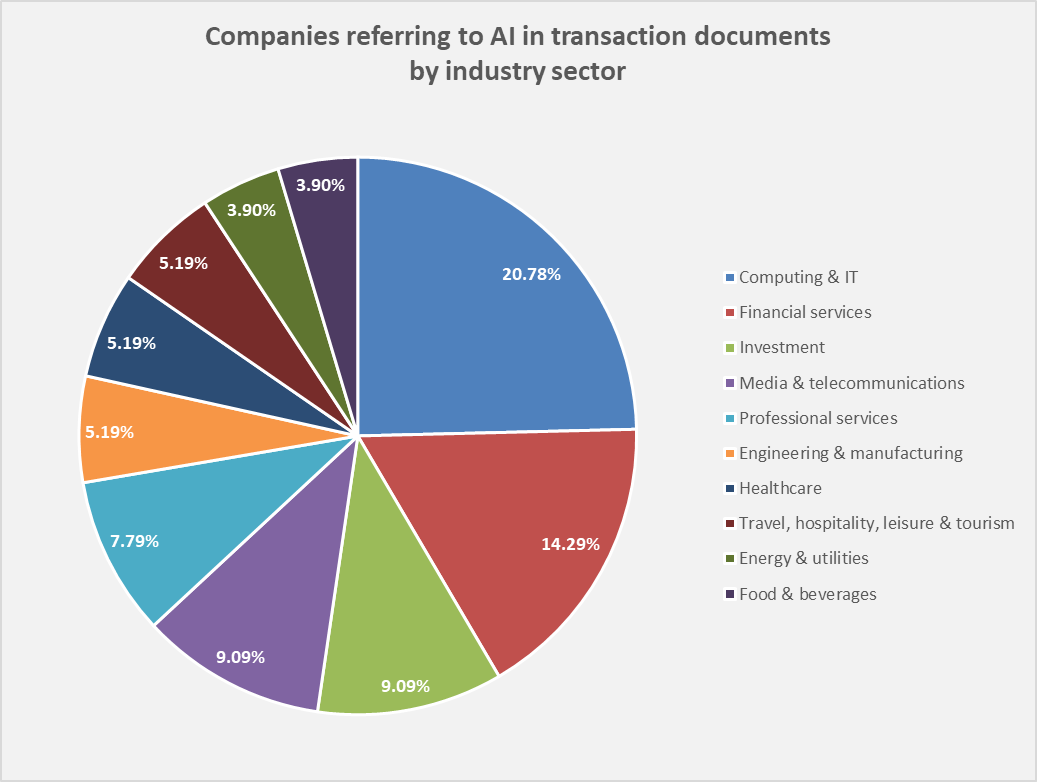 *the pie chart above shows the top ten industry sectors referring to artificial intelligence in their transaction documents across the Market Tracker database of over 4.700 corporate deals.

In November 2018, Renalytix AI, a developer of AI enabled clinical diagnostic solutions for kidney disease, listed on AIM. In its admission document, it highlighted the potential AI has in relation to the healthcare industry:

‘Machine learning is also intended to be deployed by the Company to introduce automation and intelligent decision support to high-volume clinical workloads in both primary care and clinical specialist settings. The Company believes that there are material opportunities in clinical workflow management at all clinical practice levels that could benefit from automated presentation of patient-specific treatment plans based on broadly accepted practice guidelines.’ - Renalytix AI plc, Admission Document – November 2018

In customer services, AI is being used to make huge cost savings in the form of ‘chat bots’ in banking and to provide intelligent and responsive online shopping experiences. Ocado illustrated the potential changes on the horizon for the customer of the future, who they identified as expecting ‘more choice, convenience, inspiration, personalisation and transparency.’

‘We are also embracing artificial intelligence (AI), which is helping us lower our cost base and deliver a 24/7 customer experience. Take Cora for instance -our AI Chat Bot which we launched in partnership with IBM Watson - she now handles an average of 83,000 queries a week. Given the success in the personal business, we have recently rolled out Cora to Commercial Banking.’ - Royal Bank of Scotland Group plc, Return of value – February 2019

'Artificial intelligence (AI) will enable online stores to be more personalised and to anticipate demand, while developments in robotics can provide more convenient, efficient fulfilment. Smart, interconnected devices mean shoppers can access the store whenever and wherever they want. The shopper of the future will therefore expect more choice, convenience, inspiration, personalisation and transparency. Online stores will play an essential part in meeting these needs.' - Ocado plc, Annual report 2019

In the Computing & IT industry, a number of companies highlighted the impact that they anticipated AI to have, or that AI was currently having on their businesses, with The Sage Group noting that ‘Industry’s next challenge will be to move the global conversation away from AI as a threat – or replacement – for humans, and towards encouraging organisations to approach AI as a complement to human ingenuity.’

'The Group also established a specific research function within its R&D team to further explore the rapidly changing technology landscape including in areas such as Artificial Intelligence and Machine Learning and expects to significantly increase investment in this area.' - Blue Prism Group plc, Secondary offering – January 2019

'As an industry leader in Artificial Intelligence, our customers trust us to innovate in an ethical way, which is why in 2017, we established five core principles towards the ethical creation of AI. Building on that in 2018, we launched the Roadmap for Ethical Business, built with experienced Business Builders and government officials. Our framework highlights four areas for creating a competitive, ethical AI economy: create a governance framework; make your AI accountable; build trust through transparency; and empower your workforce. Industry’s next challenge will be to move the global conversation away from AI as a threat – or replacement – for humans, and towards encouraging organisations to approach AI as a complement to human ingenuity.' - The Sage Group plc, Annual report 2019