A of key developments in corporate transactions covered by Lexis®PSL Market tracker this week.

Produce Investments cites difficulties in the agricultural sector in document

Produce Investments announced that it had received a recommended cash offer by Promethean Investments on Tuesday 11th September. In the 2.7 , the company made reference to difficulties in the agricultural sector as a result of the unseasonal spring weather this year:

The Lexis®PSL Market Tracker team has seen several specific references to the weather conditions in the UK this year. For example, National Grid plc noted in its annual report that ‘in late February adverse weather affected the UK, leading to high demand for energy on the system’ and Royal Mail stated in its annual report that ‘performance in the last month of the year was impacted by adverse weather conditions in the UK.’

The company estimates gross proceeds of the offer to be at around £70 million, which will be used to repay a shareholder loan and to support the company’s future expansion plans.

Vannin Capital is a global expert in the provision of funding to support individuals, corporate clients and law firms in the successful resolution of high- value litigation and arbitration claims. Since its formation in 2010, the Group has grown to become one of the most prominent and highly regarded legal finance providers and a major player in funding for single case actions.

The company has witnessed steady growth in recent months, expanding to and continental Europe, whilst maintaining its existing UK and Australia base. It has invested an estimated £164m into legal disputes, of which £62m has been committed in 2018. Vannin has hired David Morely, former senior partner at Allen & Overy, as its new chairman.

The litigation finance market continues to grow, as the sector expands with this combination of both public and private companies in the industry. The majority of litigation funders tend to be private and receive financing from private equity.  A handful of litigation financiers are public. Burford Capital LLC, listed on AIM, is one example of this. Burford has a market capitalisation of £4 and has experienced steady growth, to evolve into the largest litigation financier in the market.

This week Debenhams plc (Debenhams) issued a response to media speculation following the appointment of KPMG to advise the company after a series of profit warnings, job cuts and a dramatic decline in share price.

In the strategic report section of the company’s most recent annual report, Debenhams noted ‘a changing retail market’ characterised by a shift in spending priorities, with growth in leisure and experience spending and the influence of increased smartphone usage flagged as key contributors. These observations were the catalyst for ‘Debenhams Redesigned’, a revised company strategy intended to modernise the company’s offering by focusing on digital sales and customer experience. Despite a solid action plan, shares in the company dropped from around 50p per share at the end of 2017, to just under 11p per share following its press statement on Monday.

Debenhams CEO Sergio Bucher referred to ‘exceptionally difficult times in UK retail’ in the company’s June trading update. This sentiment was echoed by Sir Charlie Mayfield, chairman of John Lewis plc, who cited ‘challenging times in retail’ when the company posted a disappointing set of interim financial results on Thursday this week.

The Centre of Retail Research has heralded 2018 as ‘Retail’s year of crisis’, following a series of high profile high street failures this year. Against an increasingly turbulent backdrop, this week Lexis®PSL Market Tracker examines IPO activity in the retail sector. 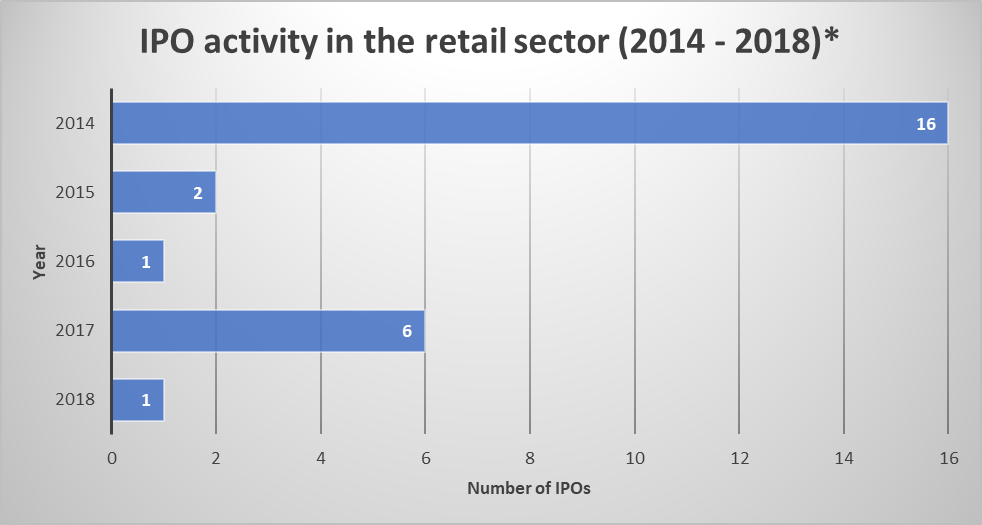 Following its high point in 2014, transaction volume for IPOs in the retail sector has experienced a decline in the last four years. Our research showed an uplift in activity in 2017, however of the 6 companies (within our scope) coming to market, 5 of these sought a listing on AIM rather than the Main Market, raising less capital and having significantly lower market capitalisations following admission than by companies in the same sector during 2014.

As a percentage of total IPO activity across all industry sectors, our research revealed similar findings. The share of IPOs in the retail and wholesale trade sector peaked at 14% of total IPO activity in 2014. Although the percentage recovered in 2017, there has been comparatively little activity in terms of new companies coming to market in this sector over the past nine months. 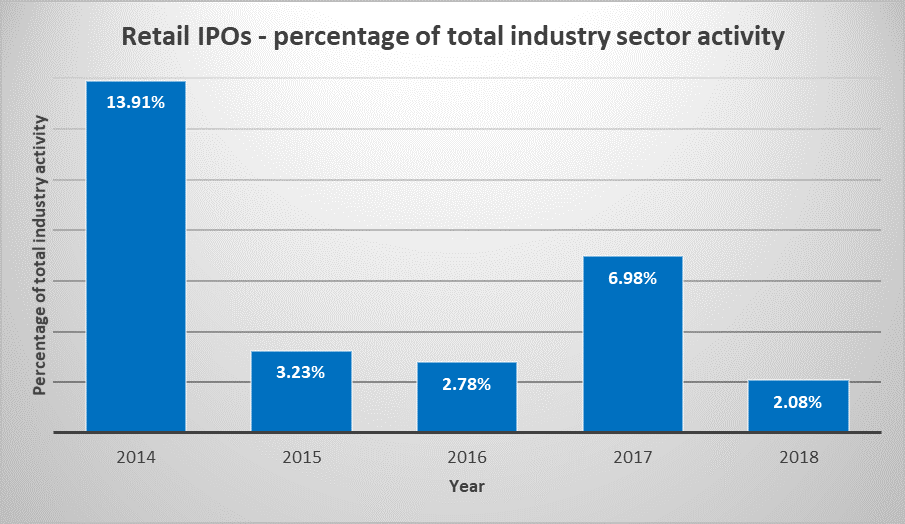 The business strategy of the companies listing in 2017, particularly their focus on digital channels and the experiential nature of their products, is consistent with the research carried out by Debenhams, which indicated a shift in consumer behaviour. These companies included: Ramsdens, a company specialising in pawnbroking loans, precious metals and retailing of second hand and new jewellery; eve Sleep, an online retailer of luxury mattresses and other sleep products; fishing tackle retailer Angling Direct; “fast fashion” digital fashion retailer Quiz; and lifestyle fashion retailer Footasylum.

‘The Company is able to offer a more affordable price to consumers as the majority of sales are conducted through the Company’s e-commerce platform, which reduces the Company’s ‘bricks and mortar’ overheads in comparison to some of the key competitors in the sleep market. The direct to consumer model also means that the Company has control and flexibility to price its products as it sees fit and to run promotions as and when it chooses as it is typically not subject to the restrictions or requirements of any intermediary as to the manner in which the products are sold.’

Brexit and its effect on consumer confidence to be an increasingly important consideration for companies coming to market over the last two years. Our research indicates (for the companies covered by Lexis®PSL Market Tracker) that although some companies in the retail sector included risk factors relating to market fluctuations and consumer appetites in IPO prospectuses and admission documents from 2014 to June 2016, this has become a more common inclusion in risk factors . Six of the eight companies that listed in the retail sector since the UK referendum in June 2016 referred to the concept of ‘consumer confidence’ in their risk factors, particularly in connection with UK political uncertainty.

All statistical data in this bulletin is provided by Lexis®PSL Market Tracker, a unique service for corporate lawyers that allows users to access, analyse and compare the specific features of corporate transactions (subscription required).