Lexis®PSL Corporate and Market Tracker has conducted research to examine the current trends in respect of UK public M&A. Data for this report has been sourced from the Market Tracker transaction data analysis tool which allows users to access, analyse and compare the specific features of numerous corporate transactions. This is an update to our Market Tracker Trend Report: Trends in UK Public M&A in 2020 in which we examined firm and possible offers announced in 2020.

The final date for inclusion of developments in this report is 31 March 2021.

The desire to agree offer terms before the end of the Brexit implementation period resulted in a strong uptick in deal activity during Q4 2020. This acceleration in takeover activity in the last quarter of 2020 translated into a sharp drop-off in deal volume and aggregate deal value in Q1 2021.  Key highlights from this report include:

In our 2020 public M&A trend report we noted that deal activity increased significantly in H2 2020 as confidence returned to the market. Q4 2020 was particularly active, with 18 firm offers announced during the period. Q1 2021 saw a drop in deal activity, with nine firm offers announced during the review period. This may have been attributable to a desire by bidders to agree offer terms before the end of the Brexit implementation period.

Aggregate deal value in Q1 2021 was £7.7bn. While this represents a decrease on Q4 2020 (£22.6bn) and Q3 2020 (£10.1bn), it is higher than the aggregate deal values in Q1 and Q2 2020. The largest transaction was the £3.5bn offer for Signature Aviation by a consortium comprising Blackstone, Global Infrastructure Partners and Bill Gates’s Cascade Investment.

Two (22%) of the nine firm offers announced in Q1 2021 had deal values exceeding £1bn. The largest transaction was the £3.5bn consortium offer by Blackstone, Global Infrastructure Partners and Cascade. Global Infrastructure Partners originally made a £3.4bn offer for Signature Aviation, but this was terminated when the consortium offer was announced. The second £1bn plus transaction announced in Q1 2021 was the £2.3bn joint offer for Aggreko by TDR Capital and I Squared Capital. 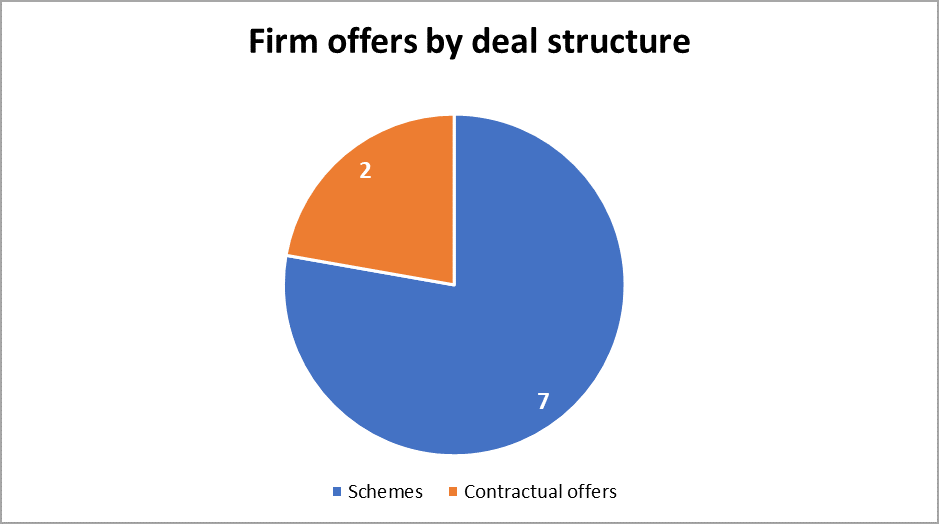 James Hay Partnership’s offer for Nucleus Financial was originally structured as a scheme, however, following some shareholder dissent surrounding the takeover, this was changed to a contractual offer on 30 March 2020. The bidder cited a desire ‘to increase certainty of execution’ as the reason for the change in structure. 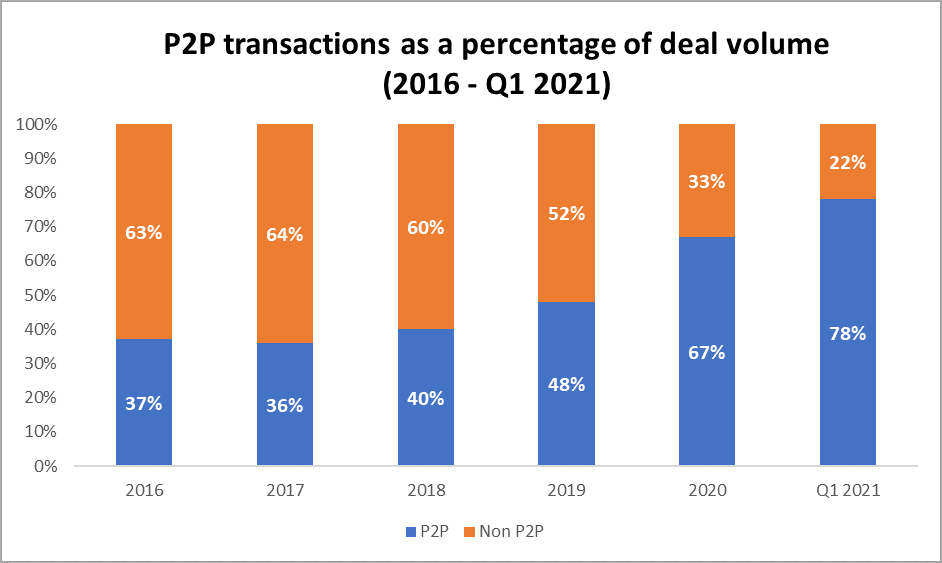 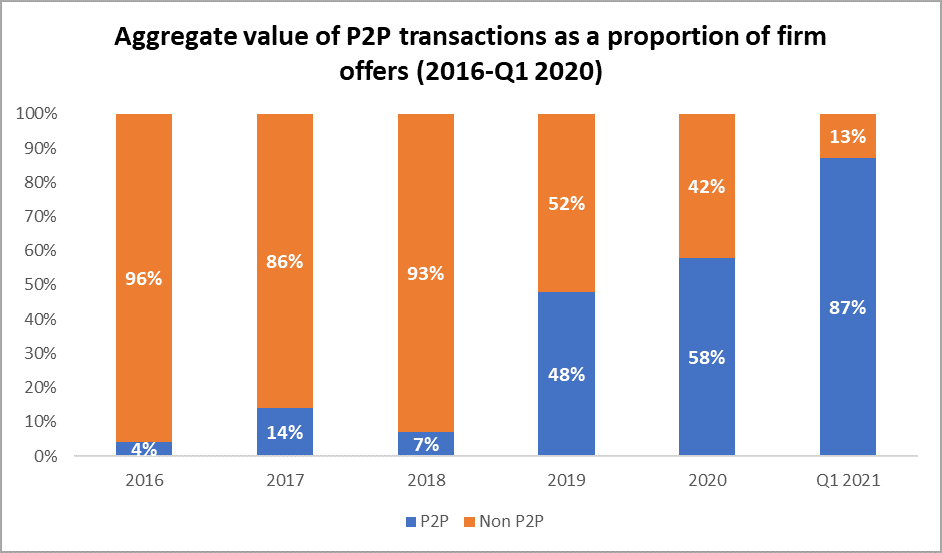 Cash remained king with all firm offers announced in Q1 2021 involving a cash element. One of the firm offers announced involved a mix of cash and shares and one was a cash offer with a share alternative. The remaining seven deals (78%) had cash as the sole form of consideration. This is similar to Q4 2020, where 16 (89%) of deals utilised cash as the sole form of consideration, and two (11%) deals used a mixture of shares and cash.

The cash consideration on Global Infrastructure Partners’ initial bid for Signature Aviation (and the subsequent consortium offer for Signature) was denominated in US dollars, with target shareholders having the option to take the cash consideration in sterling under a currency conversion facility. It is relatively unusual for offers for UK-listed targets to be made in foreign currency, although 2019 saw two such offers (Thomas Bravo’s US$3.8bn offer for Sophos and the US$3.4bn consortium bid for Inmarsat), both of which also featured currency conversion facilities. The decision to structure the takeovers in this way may have been motivated by a desire to protect the bidders from Brexit-related currency swings.

Of the nine firm offers announced: 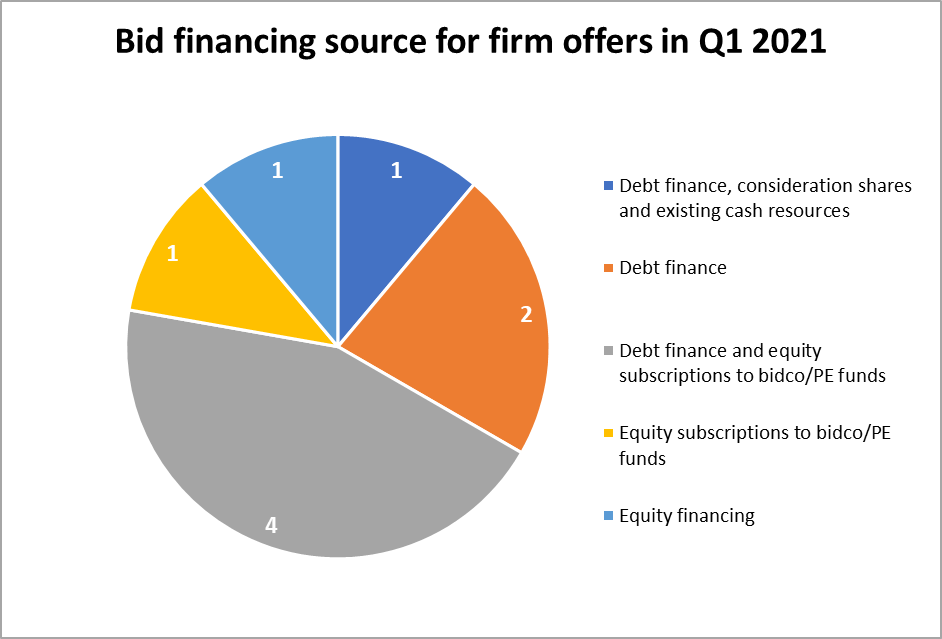 The most active sector in Q1 2021 was Financial Services, with three (33%) of the nine firm offers announced being in this sector. The remaining offers occurred in a variety of sectors 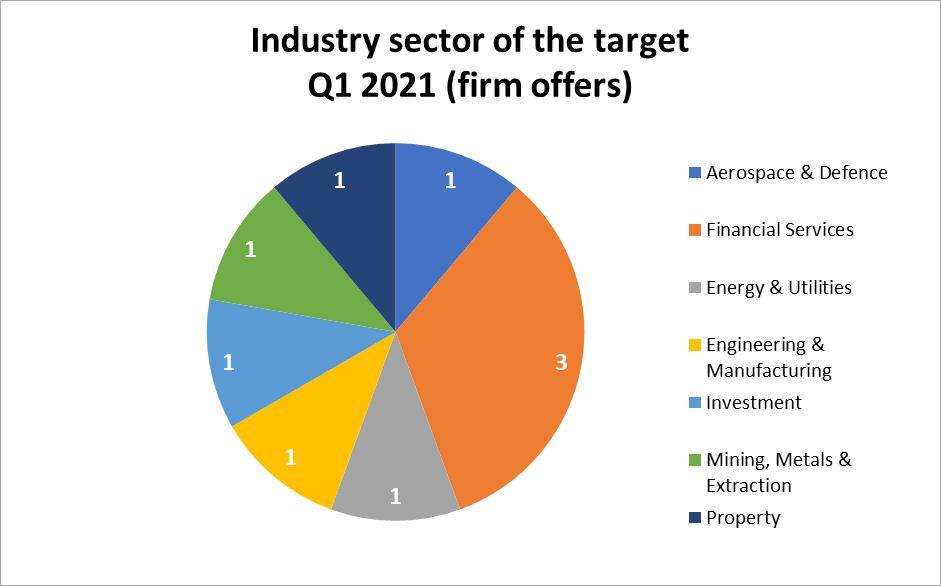 Nucleus Financial Group announced on 2 December 2020 that it was in discussions with four separate bidders in relation to possible offers for the company (see Nucleus at the centre of takeover interest). Aquiline Capital partners and Allfunds (UK) both withdrew from the process on 3 December and 4 December 2020 respectively, and Integrafin Holdings withdrew on 4 January 2021. The final offeror, Epiris, in conjunction with its associate, James Hay Partnership announced a firm offer for the company on 9 February 2021.

17 December 2020: Signature Aviation announces that it is in discussions with Blackstone regarding a possible cash offer of £3.83 per share. Signature Aviation also confirms it has received an indicative proposal from Global Infrastructure Partners (GIP) regarding a possible cash offer at a lower price than the Blackstone proposal.  The board rejects the GIP proposal.

21 December 2020: Signature Aviation states it would currently be minded to recommend a firm offer at the price set out in the Blackstone proposal.

7 January 2021: Signature Aviation confirms it has received an approach from Carlyle regarding a possible offer for the company, although no proposal has been received.

On 11 November 2020, the UK government laid before Parliament its draft National Security and Investment Bill (the NS&I Bill), which seeks to introduce a mandatory foreign direct investment (FDI) notification regime in the UK for transactions in certain sectors to protect national security. This new regime will sit alongside the existing merger control regime and replace the current powers for the government to intervene in merger investigations on national security grounds.

The NS&I Bill has passed through the House of Commons and is currently sitting in the House of Lords in the ‘Report stage’. To track the progress of the bill, see our National Security and Investment Bill—progress tracker in LexisPSL Competition. For examples of how companies are drafting offer conditions to address the forthcoming regime, see our National Security and Investment regime—market practice tracker.

Changes to the Takeover code:

On 31 March 2021, the Takeover Panel announced that it would be proceeding with the amendments to the Code, which were outlined in its October consultation paper. The amended Code comes into effect on 5 July 2021 (implementation date) and makes substantial changes to the treatment of offer conditions and the timetable for takeovers structured as contractual offers.

In addition to the 13 possible offers, there were two FSPs announced (Q1 2020: 8 FSPs/Strategic reviews, Q4 2021: 3 FSPs/Strategic reviews) during the review period, both of which were quoted on the premium segment of the Main Market. The FSPs were initiated by French Connection, which launched its FSP after receiving several possible offers, and Renishaw, which announced a FSP after the founding directors indicated their intentions to sell their 53% stake in the company. Both FSPs were ongoing as at 31 March 2021.

Firm offers included in this report

Hedge funds, GWM Asset Management and HBK Capital Management, sought to challenge Caesars’ takeover of William Hill ahead of the court hearing to sanction the scheme scheduled for 31 March 2021. In  a letter to William Hill’s board, the hedge funds reportedly accused the board of a failing to disclose potentially material information concerning Caesars’ right to terminate its joint venture with William Hill in the US in the event that one or more specified acquirers bought William Hill (see: Caesars looking to conquer US Sports betting market). According GWM and HBK (who hold a 1% and 10% stake in William Hill respectively), it was not clarified until after the shareholder vote to approve the scheme that Caesars could only add six names to its ‘blocked’ list, and that it could only substitute one of these names every six months. Judgement is currently awaited regarding the outcome of the scheme hearing.