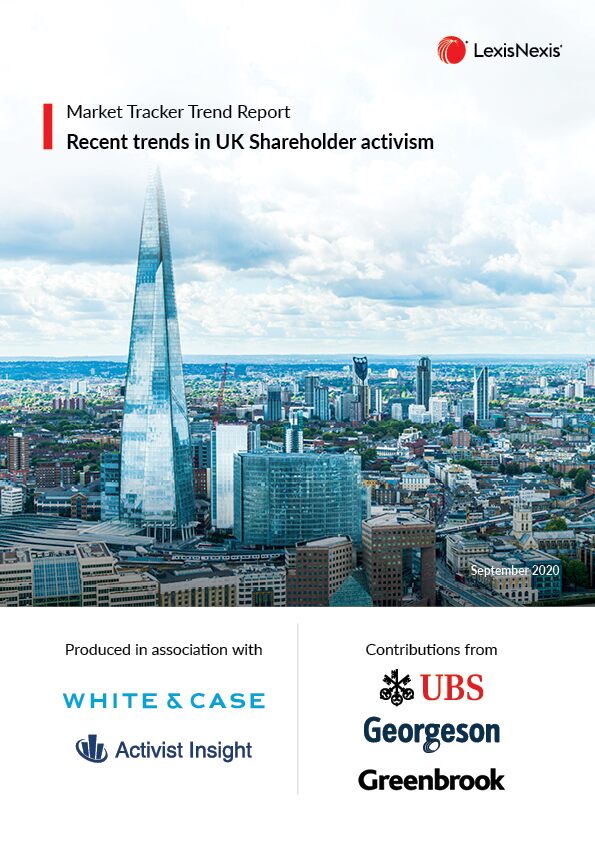 This Market Tracker trend report looks at recent trends in shareholder activism in the UK, including a review of developments in H1 2020 and the outlook and predictions for H2 2020 and beyond. Produced in association with White & Case and Activist Insight, with contributions from UBS Investment Bank, Georgeson and Greenbrook, it also looks at how companies can prepare for an activist approach and provides tips on how activists can run a successful campaign in the UK.

Although the number of companies publicly subjected to activist demands decreased in H1 2020 when compared to H1 2019 and H2 2019, the aggregate amount of capital deployed in campaigns was significantly higher, with the value of newly disclosed activist investments by primary and partial focus activists at UK-headquartered companies being US$2.9bn. This is nearly double the levels seen in 2019 (H1 2019: US$1.3bn; H2 2019: US$1.4bn) and was largely attributable to the activist campaign against Prudential, which accounted for over US$2bn of activists’ positions in H1 2020.

Shareholder activism was spread across a range of sectors in H1 2020. Basic Materials, Financial Services and Industrials were the most active sectors in the UK, with three companies the subject of activist campaigns in each sector. The Financial Services sector saw the highest amount of capital deployed by activists in the UK, with the value of newly disclosed activist investments by primary and partial focus activists at UK-headquartered companies in H1 2020 being US$2.4bn.

Activists pursued a range of strategies in H1 2020, with the most common demand in the UK being board-related, which accounted for 18 (56%) of the 32 public demands made by activists during the period. The next most popular demand types were M&A (22%) and balance sheet-related (9%).