Market capitalisation has been calculated at the opening price on the day of admission. Where gross proceeds have been calculated, the figures refer to the gross proceeds received by the company and not proceeds raised by selling shareholders (if any). The percentages included in this report have been rounded up or down as appropriate and accordingly percentages may not in aggregate add up to 100%.

This review of 2019 IPOs forms part of our annual trend report which aims to provide insight into the current dynamics of ECM activity in the UK. The other parts of our 2019 trend report comprise:

IPO activity slowed substantially in 2019 as Brexit deadlines and geopolitical tensions suppressed investor appetite and created uncertainty for issuers considering an initial public offer of shares. Main Market IPO activity was substantially subdued compared to the year before. However, the London flagship market did attract some high profile international companies such as Network International Holdings and Airtel Africa both valued at over £2.5bn on admission. AIM had a difficult year in terms of IPO activity with only ten companies coming to the market, a record low since its launch in 1995.

Twenty six companies within our scope completed an IPO on the Main Market in 2019, representing a 45% decrease from 2018 which saw 47 IPOs on the Main Market. From 2017 to 2018, Main Market IPOs decreased by 19%. The steep decline from 2018 to 2019 can largely be attributed to geopolitical tensions and political uncertainty in the UK but also part of a long standing trend of declining IPO markets across the globe.

UK IPO activity had seen some recovery in 2017 and 2018 after the low in 2016, the year of the UK’s Brexit referendum, which saw 28 Main Market IPOs but 2019 activity dipped down further still. 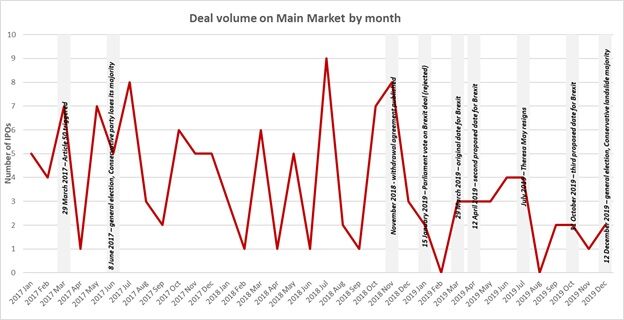 Although 2019 started slowly, the first half of the year was the busiest with June and July showing the most IPO activity (four companies listing in each month). Companies may have been keen to complete their IPOs after the delayed Brexit deadline in April 2019 and before the next deadline at the end of October 2019.

The last quarter of 2019 was subdued with the October Brexit deadline and general election likely to have had an impact on activity levels. This contrasts with the last quarters in 2017 and 2018 which showed more healthy IPO activity. 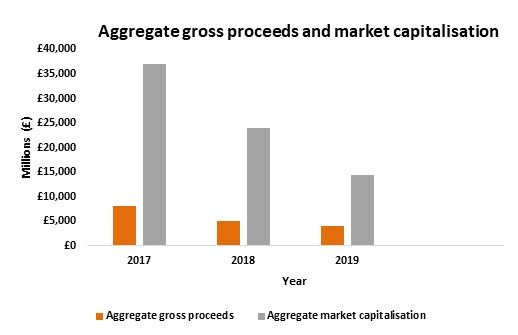 The top three Main Market IPOs for 2019 in terms of market capitalisation were Airtel Africa plc, Network International Holdings plc and Trainline plc. Even with Brexit on the horizon, international companies such as Airtel Africa (providing telecommunications services in Africa) and Network International Holdings (a payments solutions provider in the Middle East and Africa) continued to be attracted to the Main Market. Airtel Africa was valued at £2.74bn on admission and also listed on the Official Trading List of the Nigerian Stock Exchange.

The Chinese securities group, Huatai Securities Co Ltd, was the largest Main Market IPO in 2019 in terms of gross proceeds raised by the company. It listed global depositary receipts (GDRs) in London under the Shanghai-London Stock Connect cross-listing mechanism in June 2019. Huatai Securities was the first company to make use of the Shanghai-London Stock Connect which allows Shanghai listed companies to issue GDRs on the London Stock Exchange and London-listed companies to issue Chinese Depositary Receipts in Shanghai.

Huatai Securities raised £1.3bn, one and a half times more than the largest IPO in terms of gross proceeds for 2018 (Smithson Investment Trust plc which raised £822.1m) and just over the £1.2bn raised by EN+ Group plc in its GDR issue in 2017. 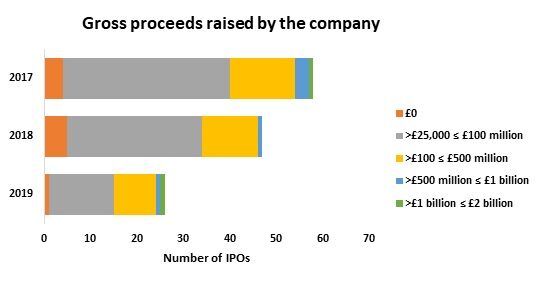 In 2019, 42% of Main Market IPOs raised over £100m. In both 2018 and 2017 the percentages were lower at 27% and 31% respectively. This indicates an increase in the proportion of companies raising higher levels of gross proceeds in 2019 compared to the previous two years.

One company in each of 2017 and 2019 raised over £1bn (and both were GDR issues by overseas companies) whereas 2018 did not see any companies reach the £1bn mark. 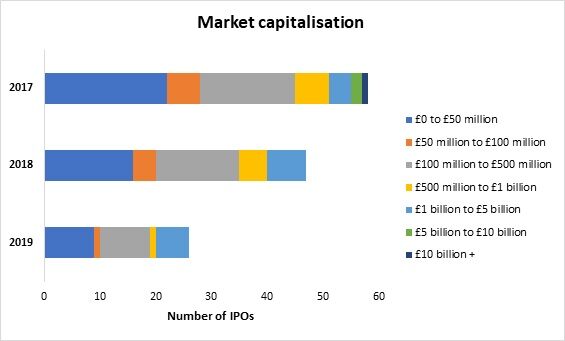 Unfavourable market conditions appear to have deterred an increased number of smaller companies from listing on the Main Market. Companies listing with an opening market capitalisation below £100m in 2019 made up a lower percentage of all Main Market IPOs than in previous years, with 38% of transactions falling into this range, compared to 42% in 2018 and 48% in 2017. 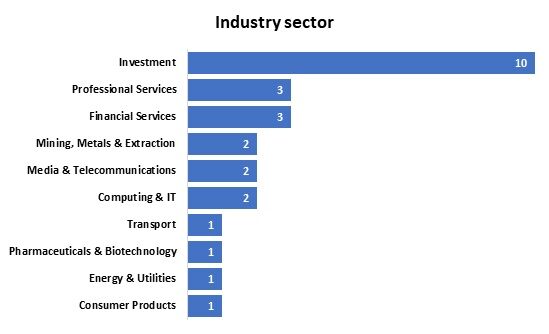 Two companies in the investment sector were admitted to the specialist fund segment of the Main Market for highly specialised investment entities.

These companies raised £1.5bn in aggregate representing 37% of all funds raised in Main Market IPOs in 2019. £1.3bn of this was raised by Huatai Securities which was the top grossing Main Market IPO in 2019 raising more than double the amount of the second highest grossing 2019 Main Market IPO (Airtel Africa).

2019 saw two IPOs in the media and telecommunications sector: Airtel Africa and Helios Towers. Both companies provide telecommunications services in Africa. Helios Towers first announced an intention to float on the Main Market in early 2018 but within two weeks of that announcement postponed its IPO. It listed in October 2019 following Airtel Africa’s float in July 2019.

The two companies in the mining sector completing Main Market IPOs both listed on the standard segment of the Official List. Ferro-Alloy, the Kazakhstan based vanadium mining company, raised £5m and Metalnrg, investing in the natural resources sector, raised just over a quarter of a million.

These were both considerably smaller in terms of market capitalisation and gross proceeds raised than the mining sector companies listing on the Main Market in 2018 and 2017.

The investment sector was also best represented in the top ten Main Market IPOs by gross proceeds in 2019 with five companies from that sector appearing in the list. 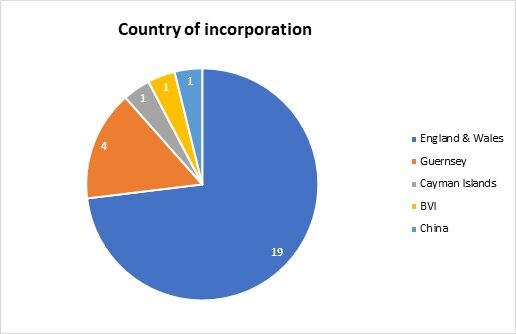 Country of incorporation and operation—Main Market

The majority of companies completing Main Market IPOs in 2019 were incorporated in England & Wales as was the case in the previous two years. As noted above, 2019 saw the first Chinese company, Huatai Securities Co Ltd, list on the Main Market under the Shanghai-London Stock Connect cross-listing mechanism with its issue of GDRs. 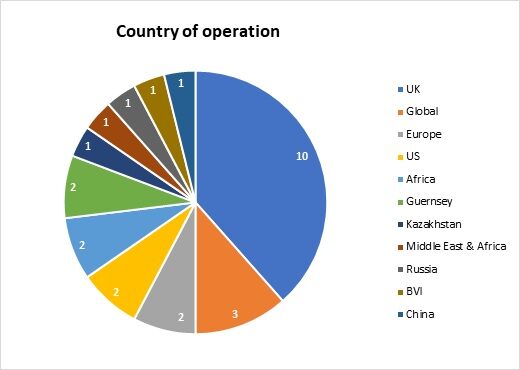 The spread of countries in which the companies listing in 2019 operate was much broader than the countries of incorporation represented (as also seen in the previous year). Brexit worries did not seem to deter international businesses from listing in London such as Metalnrg plc (United States), Airtel Africa plc (Africa), Network International Holdings plc (Middle East & Africa), Ferro-Alloy Resources Limited (Kazakhstan), Zaim Credit Systems plc (Russia) and Huatai Securities Co Ltd (China). 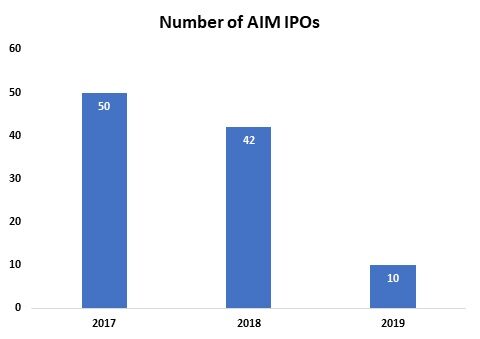 The decrease from 2018 to 2019 was much more marked than the decrease in Main Market deal volume at 45%.

This graph further shows how subdued the AIM IPO market was throughout 2019 with the first quarter being the quietest, only recording one IPO. Four AIM IPOs completed in the second quarter of 2019, followed by two in the third quarter and three in the last quarter of the year.

The largest AIM IPO in 2019 in terms of both market capitalisation and gross proceeds raised, Uniphar plc, completed in July.

The second quarter of 2018 was also the busiest for AIM in that year. In 2017, the last quarter of the year saw the most AIM IPOs take place. 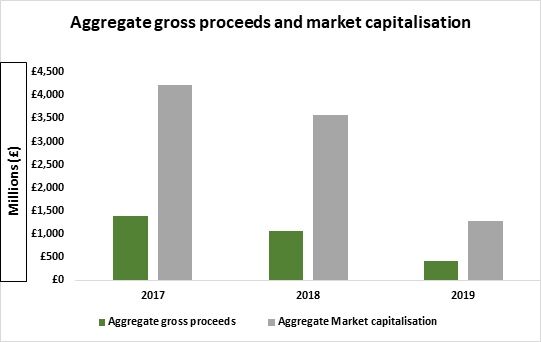 The average market capitalisation for a company listing on AIM in 2019 was £128m which was up on the average for 2018 and 2017 (around £85m in each year) which indicates that in the challenging conditions seen in 2019, relatively larger companies were coming to the market than in the previous two years.

The top three AIM IPOs in 2019 in terms of both market capitalisation and gross proceeds were Uniphar plc, Loungers plc and The Pebble Group Plc. Uniphar plc, the established healthcare services business headquartered in Ireland, also listed on Euronext Dublin and raised £121m in gross proceeds and was valued at £299m on admission. 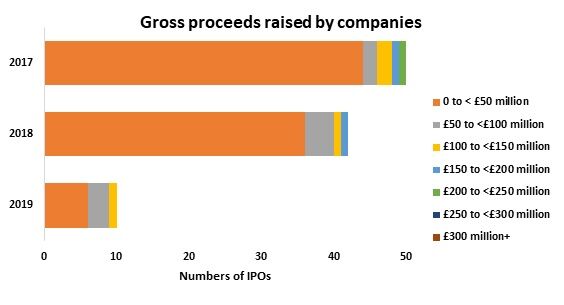 Most companies (60%) completing an AIM IPO in 2019 raised less than £50m. This was also the case in 2018 and 2017 although the proportion of companies in this range bracket was higher. 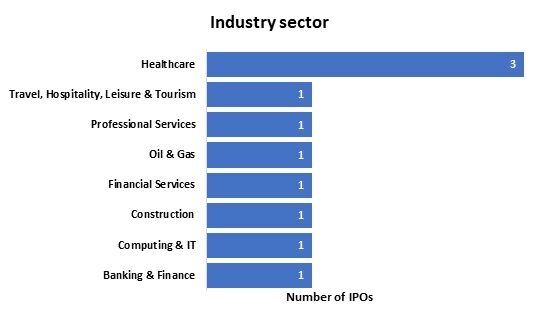 There was diversity in industry sector in companies completing an AIM IPO in 2019 but the most popular was healthcare with three AIM IPOs. The healthcare sector also saw the largest AIM IPO in terms of market capitalisation and gross proceeds (Uniphar plc). The other two 2019 healthcare sector AIM IPOs were Diaceuticals plc, a Belfast-based data analytics company, and Induction Healthcare Group plc, a healthcare technology company which has developed an app to help healthcare professionals communicate with each other.

The popularity of the healthcare sector for 2019 AIM IPOs can be contrasted with 2019 Main Market IPOs where the investment sector was the most popular with 38% of companies listing in that sector. No investment sector company was admitted to AIM in 2019 (although Longboat Energy plc, which is categorised in the Oil & Gas industry sector, is newly incorporated and regarded as an investing company for the purposes of the AIM Rules for Companies). Four newly incorporated investment sector companies completing 2019 Main Market IPOs were admitted to the standard segment of the Official List.

Country of incorporation and operation—AIM

AIM saw much less geographical diversification in 2019 in terms of companies’ country of incorporation and country of operation than in 2018. In 2019 all ten companies which completed an AIM IPO were incorporated and operated in the UK, Ireland and/or Channel Islands. In 2018, AIM attracted a variety of international companies with operations in Europe, Africa, Australia, US, UAE and Asia Pacific.