Market Tracker has conducted some research into delistings announced via the RNS, excluding those that delisted due to a takeover. Our research indicates that during 2019, 25 companies announced that they would be seeking shareholder approval to delist their shares from the London Stock Exchange (LSE).

Our research found that 22 companies listed on AIM decided to leave the junior market, making up 88% of all delistings in 2019 overall. This represents an increase of 9% from the last time we carried out this research for the period 1 February 2017 to 31 January 2018. 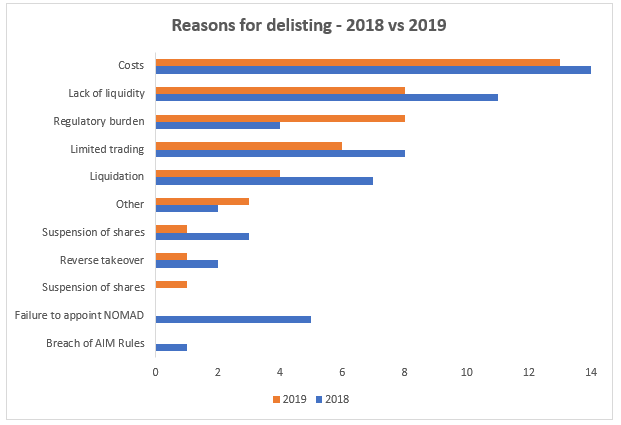 Costs remain high on the list of reasons to delist from AIM, with 59% of the companies citing it as a motivating factor. Lack of liquidity and the regulatory burden associated with an AIM listing were also common reasons, with over a third of the companies delisting from AIM citing this as the primary reason for delisting, or a key reason among others. The number of companies citing regulatory burden as a reason doubled from 2018 to 2019. Oleeo plc’s announcement is typical of the wording used by companies in their shareholder circulars:

‘the considerable costs, management time and the legal and regulatory burden associated with maintaining the Company’s AIM Admission are, in the Board’s opinion, materially disproportionate to the benefits to the Company and Cancellation will enable the Company to reduce administrative costs’

Poor market conditions, which have affected deal volume in relation to new issues on the LSE, also impacted companies with an existing listing on the publicly traded markets. Of the 25 companies reviewed, three were listed on the Main Market, including, Avocet Mining, JP Morgan Convertibles Income Fund and the high-profile departure of Thomas Cook Group. All three companies had no option but to delist as the result of a liquidation. Across both markets, only 54.6% of companies intended to continue to trade after delisting.

The effect of Brexit on market uncertainty was not apparent from company announcements, with only one company, C.H. Bailey plc, specifically referring to it: ‘we believe there will be continued growth in the UK engineering business. However, the continued uncertainty of Brexit may impact our customers' businesses and therefore could have an adverse effect on our business growth.’ Nevertheless, it is notable that when looking at AIM that around 55% of the companies delisting in 2019 were incorporated outside the UK, a disproportionately high number in relation to the geographical origin of all companies listed on the junior market. In addition, approximately 28% of the companies delisting from AIM intended to maintain a listing elsewhere.