Market Tracker has conducted research into delistings on the London Stock Exchange (LSE) between 1 January – 30 April 2020, excluding those that delisted due to a takeover.

In 2019, the LSE saw a total of 29 delistings, of which 89.66% consisted of AIM delistings. Between 1 January - 30 April 2020, there were 19 delistings, more than double that of the same period in 2019, which saw 8 companies delist from the LSE. Whilst the majority of delistings appear to be from AIM (accounting for 68.42% of the total), this year has already seen double the number of delistings on the Main Market than in the full year of 2019, with 6 announced so far. In the same period last year, no delistings from the Main Market had been announced.

Notably, the increase in delistings becomes apparent from February, after growing market uncertainty caused by COVID-19 which overshadowed previous hopes of a ‘Boris bounce’ following the December 2019 election and less uncertainty regarding Brexit. 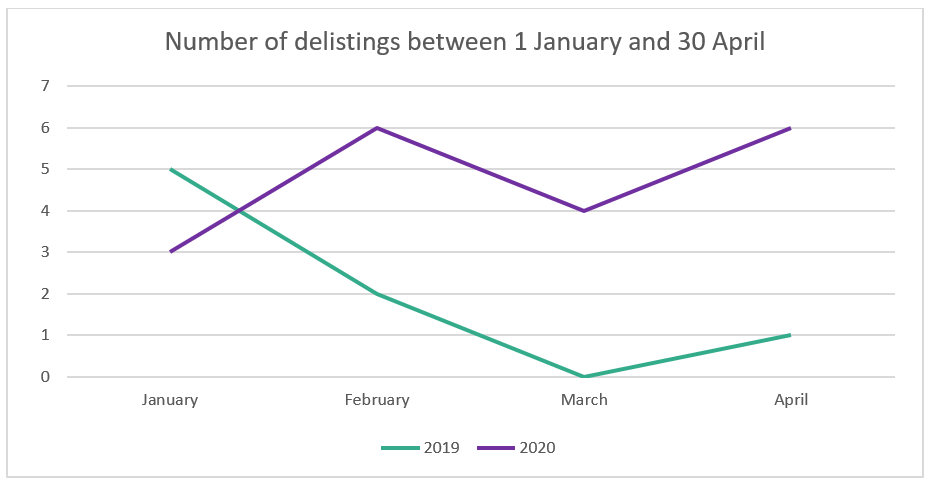 Upon closer inspection, Market Tracker notes that this trend may also be detected within the reasons companies have given for delisting. 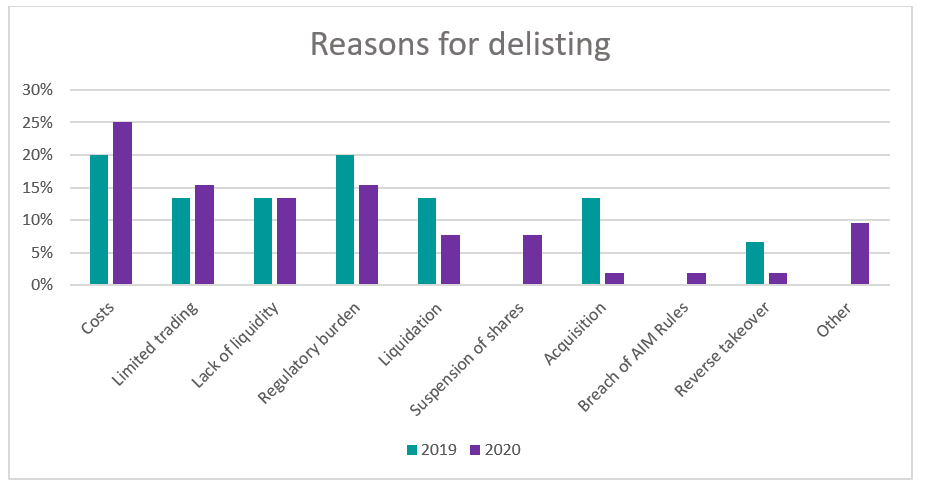 With continued uncertainty and market turmoil, costs remain the number one motivator for delisting in both 2019 and 2020, with many companies presumably believing this outweighs the benefits of listing.  There has also been an increase in companies citing limited trading (8 in 2020 against 2 in 2019) and lack of liquidity (7 in 2020 against 2 in 2019) as key factors for delisting.

Several companies have addressed the need to reduce costs given the current climate, including Cloudbuy plc, who noted ‘that further significant cost reductions are required’, following further shortfalls in revenue.

Management Consulting Group plc directly addressed the impact of COVID-19 in its rationale for delisting, stating; ‘The market and general economic turmoil that has been unleashed in recent weeks by the COVID-19 epidemic is expected to bring still further significant challenges for the Company and it is expected that operating in this uncertain and unpredictable environment will likely have a further negative impact on revenues’. As such, the company have pronounced cost savings as a result of delisting a ‘welcome relief from the pressure that the Company is currently experiencing on its cash flow’.

Similarly, Firestone Diamonds plc has stated ‘the need to preserve cash by all means possible to ensure the Company survives the current market downturn’, and as such the board believes funds required to maintain the listing can be better utilised.  The company further goes on to state that ‘poor market conditions’ within its sector are expected to continue for the foreseeable future hence ‘the Board sees limited value in maintaining the listing as it is unlikely to provide a positive platform for any corporate opportunities’.

The majority of delistings in 2019 consisted of companies whose country of incorporation was outside the UK, making up 51.72% of all delistings. This was understandable given the impact of Brexit and the instability caused specifically to the UK markets. With current market turmoil in 2020 being at a much more global scale, this trend has not continued, as we see an increase in UK companies delisting from the LSE, comprising a total of 73.68 % of 2020 delistings so far, compared to 62.5% for the same period in 2019. With 14 UK-incorporated companies delisting in 2020 so far, we have also already matched the total number of UK-incorporated delistings for the whole of 2019. 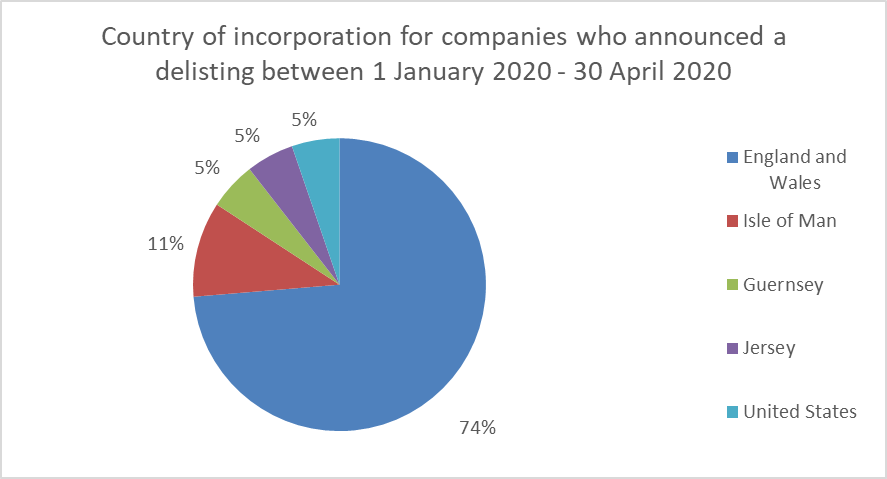 Some of the companies who have delisted include US based oil giant Schlumberger LD, which will continue to be listed on the New York Stock Exchange and Paris Euronext, and Vordere plc, which suspended its shares in July 2019, and has cited ongoing litigation as one of the reasons for the delisting. Other notable delistings include NMC Healthcare plc, which was hit by scandal when hedge fund Muddy Waters highlighted numerous governance and reporting issues. This led to NMC suspending their shares in February 2020, before eventually delisting on the advice of administrators in April.