This analysis looks at the 97 secondary equity fundraisings on the Main Market or AIM raising at least £10m which were announced during the three-month period 1 April 2020 to 30 June 2020. It looks at placings, rights issues and open offers and considers the impact the coronavirus (COVID-19) crisis has had on secondary equity offers.

The three month period 1 April to 30 June 2020 has seen a huge surge in equity fundraisings by Main Market and AIM companies. Companies have been raising funds to strengthen their balance sheets to alleviate the impact of the pandemic as well as to exploit acquisition opportunities that may arise in the post-coronavirus environment. 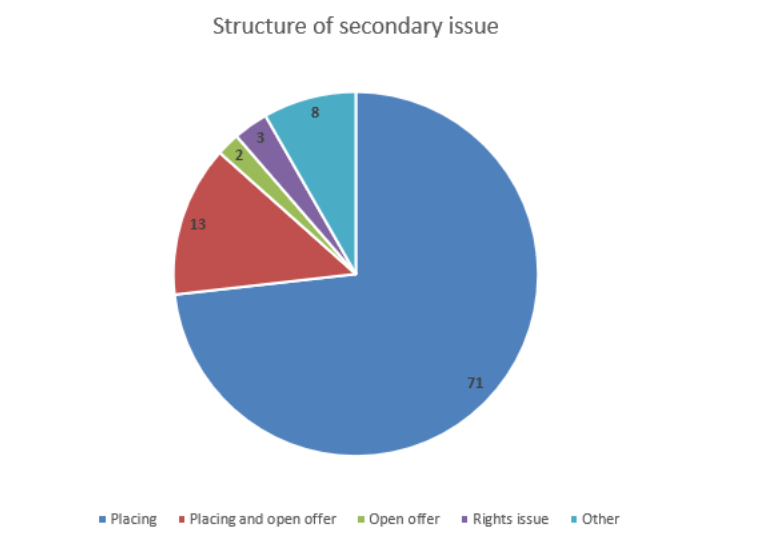 The majority of companies (80%) raised gross proceeds of less than £200m with the £10m to £50m range being the most popular. The top three fundraisings by Main Market companies were:

The top three fundraisings on AIM in the three month period were:

As also seen in our interim analysis, an institutional placing was the most popular deal structure. In 84 secondary offers announced in the three month period reviewed, the main part of the fundraising was a placing and 13 of these incorporated an open offer as an addition to a placing.

An institutional placing to a selected group of investors is the fastest and simplest method to raise equity finance (provided sufficient shareholder authorities are in place) and can often be completed in a single day using an accelerated bookbuild to price and allocate the shares. Placings are historically the most popular secondary fundraising structure (as also evidenced in our ECM Trend Report—Secondary Offers in 2019—Main Market and AIM) and not surprisingly this trend has continued since the coronavirus crisis started as companies seek to raise funds on an urgent basis.

However, there are constraints on the size of a non pre-emptive offer. Companies will need to adhere to the limits set by investor bodies such as the Pre-Emption Group (PEG). To assist companies raising equity during the coronavirus pandemic, PEG issued a statement on 1 April 2020 recommending that institutional shareholders should consider supporting, on a case by case basis, non pre-emptive issuances by companies of up to 20% of their issued share capital during the crisis (an increase from the usual 5% limit for a general disapplication of pre-emption rights plus 5% for a specific acquisition or capital investment).

A placing by a Main Market company must also be limited to 19.99% of the company’s existing issued share capital if the requirement for a prospectus is to be avoided.

Out of the 70 companies undertaking a placing (where this was the main part of the fundraising), only SDCL Energy Efficiency Income Trust plc (listed on the Main Market) published a prospectus in connection with its placing pursuant to a share issuance programme.

One placing seen in the period reviewed involved a dividend reinvestment plan. SSP Group plc announced a placing on 3 June 2020 solely to certain existing shareholders who were entitled to its 2019 final dividend to offer them the chance to re-invest the dividend back into the company with the aim of retaining cash in the business. Entitled shareholders were not permitted to apply for an allocation in the placing that exceeded the value of their dividend payment. In addition to the placing, directors and senior managers re-invested all or part of their dividend entitlement by way of a subscription for shares and SSP Group also undertook a retail offer through the PrimaryBid platform. SSP Group stated that the gross proceeds from the fundraising would not exceed the total value of the 2019 final dividend.

Consistent with our interim analysis, an increase in the use of cash box structures has been seen with 35 of the 84 placings (42%) structured as cash box placings.

Statutory pre-emption rights do not apply to a placing using a cash box structure as it involves an issue of shares for non-cash consideration which makes this a useful way for issuers with insufficient shareholder pre-emption disapplication authority to undertake an urgent capital raising.

Historically cash box structures had fallen out of favour with investors because of concerns they were being used to circumvent the pre-emption rules. PEG and other investor bodies explicitly treat a cash box placing as an issue for cash so that this type of deal structure is bound by the limits on non pre-emptive issues set out in PEG’s Statement of Principles.

With PEG’s relaxation of its limit on non pre-emptive offers during the coronavirus pandemic, an issuer can quickly place up to 20% of its existing issued share capital with investors using a cash box structure even if it does not have sufficient pre-emption disapplication authority.

PEG’s temporary relaxation of its limit on non pre-emptive issues has clearly been welcomed by companies. 87% of companies undertaking a placing as the main part of their fundraising issued placing shares representing more than 5% of their issued share capital and in nearly two-thirds of cases the placing shares represented more than 10% of existing issued share capital. 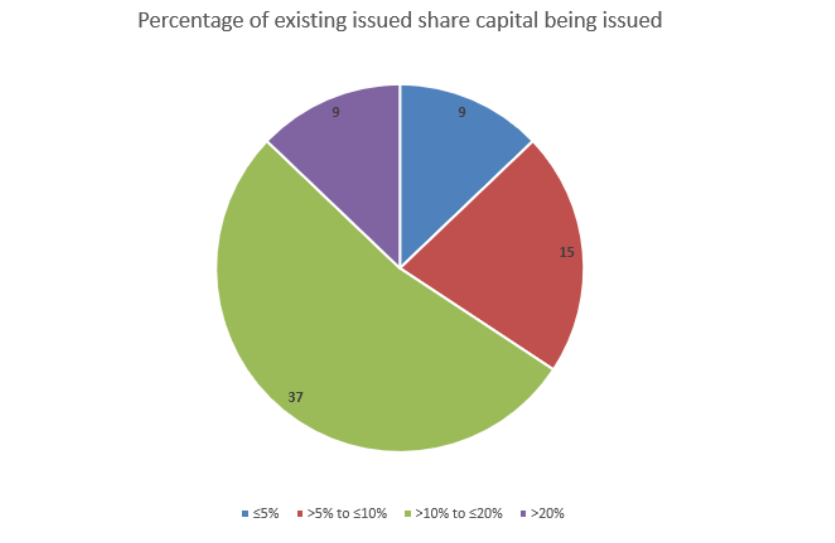 PEG’s 1 April 2020 statement on its expectations of issuers in connection with non pre-emptive issues during the coronavirus pandemic states that if flexibility to issue up to 20% of a company’s issued share capital non pre-emptively is used issuers should, among other things, ensure that a representative sample of the company’s major shareholders are consulted and that, as far as possible the issue is made on a soft pre-emptive basis. Just over half the companies undertaking fundraisings where the main part of the issue was a placing stated in their fundraising announcement that major shareholders had been consulted in advance.

17 companies stated that the principles of pre-emption had been respected as far as possible through the allocation process. ASOS plc made a more specific statement in its announcement that 95% of the placing shares had been allocated to ASOS’s existing shareholders including a pro rata allocation to its largest shareholder.

Being a pre-emptive offer, there is no requirement for shareholder disapplication of pre-emption rights for an open offer although companies usually seek a disapplication in order to be able to disregard overseas shareholders and deal with fractional entitlements. A company will also need sufficient shareholder authority to allot shares (typically taken over two-thirds of issued share capital on an annual basis).

A large pre-emptive offer such as an open offer or rights issue will generally involve an offer to the public and require an FCA prospectus to be published. However, there is an exemption from the requirement to produce a prospectus for an offer to the public where the amount raised is less that €8m. Companies may also be able to produce a ‘simplified prospectus’ which was introduced by the Prospectus Regulation in July 2019 and is available for existing issuers which have been listed for at least 18 months on a regulated market or SME growth market (which includes AIM). The disclosure requirements for a simplified prospectus are less onerous, in particular only one year of financial historical information is required and no operating and financial review.

In its statement of policy issued on 8 April 2020 on listed companies and recapitalisation issuances during the coronavirus crisis, the FCA encouraged issuers to use the simplified disclosure regime where possible when recapitalising in response to the crisis.

Out of the 15 open offers announced in the three month period reviewed:

Even if the timetable does not need to factor in the publication of a prospectus, an open offer must be open for at least 10 business days under the Listing Rules and the AIM Rules for Companies. The offer period can run concurrently with any general meeting notice period required which results in a shorter timetable for an open offer than for a rights issue (where the offer period and meeting notice period must run consecutively).

The length of time an open offer takes to complete was highlighted in a report by Hardman & Co in collaboration with the Quoted Companies Alliance entitled ‘Are the public markets closing to smaller companies?’ (Hardman Report) published in May 2020 which suggests that steps should be taken to digitalise and speed up the open offer process reducing the period of risk for companies and advisers.

A rights issue is the fundraising structure generally preferred by the investor community as it is a fully pre-emptive offer which also compensates shareholders who do not wish to take up their shares in the offer. Advantages to the company are that there is no limit on the size (subject to shareholder authorities) or discount to market price at which the new shares are offered.

The rights issues announced in the three month period reviewed were:

The shares were offered at a deep discount to market price which was similar in all three transactions: Whitbread 37.4%, Hyve 39% and Mitie at 40.7%.

The period 1 April to 30 June 2020 has seen an increasing number of companies undertaking a retail offer as an addition to a non pre-emptive placing. This trend seems to have been kicked off by the FTSE 100 company, Compass Group plc, which included a small retail offer through the PrimaryBid investment platform alongside its institutional placing in May 2020.

Since the Compass Group fundraising, a further 15 companies in our review period undertook a retail offer through the PrimaryBid platform.

There has been increasing concern among market commentators that retail investors are being excluded from the vast majority of fundraisings by UK plcs which are often undertaken at a discounted price. An open letter coordinated by PrimaryBid and signed by a number of investment fund managers calls on listed companies to make a tranche of shares available for retail investors as part of a fundraise.

The Hardman Report suggests that one way to encourage companies to IPO or stay public would be to improve liquidity by making the facility for retail investors to take part in offers mandatory. The old ‘yellow book’ Listing Rules (before they became part of the FCA Handbook) used to contain a requirement that issues over a certain size had to have some sort of public marketing.

After a busy H1 there may be a slow down in the rate of secondary offerings in August which is typically a quiet month for equity capital market activity. However as furloughing and government funding schemes come to an end in the autumn there may again be an uptick in secondary fundraisings. PEG’s temporary increased threshold for non pre-emptive issues is in place until 30 September 2020 and it remains to be seen whether this deadline will be extended.

Provided investor demand remains strong, larger equity fundraisings including rights issues which may be in the pipeline but typically have a longer lead time may also be seen later in the year.