This analysis considers the initial impact of the coronavirus (COVID-19) crisis on a sample of fundraisings by Main Market and AIM companies in the seven week period between 1 April and 20 May 2020.

While the coronavirus (COVID-19) crisis has brought IPOs to a standstill, the secondary fundraising market has been active as companies seek to raise funds to bolster their balance sheets and provide working capital flexibility. This analysis looks at secondary equity fundraisings by listed and AIM companies raising at least £10 million in the seven week period between 1 April and 20 May 2020.

Public companies seeking to raise funds via an equity fundraising are subject to a number of constraints imposed by company law and regulation which will dictate the fundraising structure they are able to use and time taken to completion.

An equity fundraising may trigger the requirement for a prospectus to be published which will add considerably to the cost and length of a transaction. A public company wishing to offer shares to the public or have shares admitted to trading on the Main Market of the London Stock Exchange must publish an FCA approved prospectus unless an exemption applies. A company wishing to do a quick fundraising will structure the transaction to fall within relevant exemptions under the Prospectus Regulation, for example an offer to institutional investors only of up to 19.99% of its issued share capital. However a large pre-emptive fundraising will require a prospectus.

Consideration must also be given to whether sufficient shareholder authority to allot shares and (when issuing shares for cash) disapply statutory pre-emption rights under the Companies Act 2006 is in place. Listed and AIM companies usually obtain these shareholder authorities on an annual basis at their annual general meeting however if a company has already used up its authorities during the year or wishes to issue shares in excess of the current authority it will need to call a general meeting to obtain fresh shareholder consents. In a cash box placing shares are issued for non-cash consideration avoiding the need to disapply pre-emption rights making this a speedy fundraising structure as companies often have sufficient authority to allot shares (typically taken over a third of their issued share capital at each annual general meeting).

Guidelines from bodies representing institutional investors set a limit on the percentage of issued share capital that premium listed companies are likely to be able to issue non pre-emptively. The Pre-Emption Group (PEG) advises that institutional shareholders should generally not support a resolution to disapply statutory pre-emption rights above a certain threshold. Before 1 April 2020 the limit was 5% of existing issued share capital for a general disapplication plus 5% for a specific acquisition or capital investment. This limit has been temporarily increased to 20% by PEG to support companies during the coronavirus crisis (subject to some provisos).

A company undertaking a rights issue or open offer must also factor in the requirement in the Listing Rules and AIM Rules for Companies for an offer to be open for acceptances for at least 10 business days.

In addition, the Listing Rules dictate the price at which shares can be issued in certain fundraisings. A premium listed company should not issue new shares in an open offer, placing, vendor consideration placing or offer for subscription at a discount of more than 10% to the market price of the shares at the time of announcing the terms of the offer or agreeing the placing (unless specifically approved by shareholders or the issue is being made under a pre-existing authority to disapply statutory pre-emption rights). Under the PEG Statement of Principles, premium listed companies should not issue shares non pre-emptively at more than a 5% discount.

The vast majority of the fundraisings in our data set were structured as non pre-emptive placings typically to a selected group of investors using an accelerated bookbuild process. There were 17 placings for cash consideration, 17 cash box placings and one cash box placing with a retail offer attached. This last transaction was by the FTSE 100 company, Compass Group plc, which conducted its retail offer via the investment platform PrimaryBid. 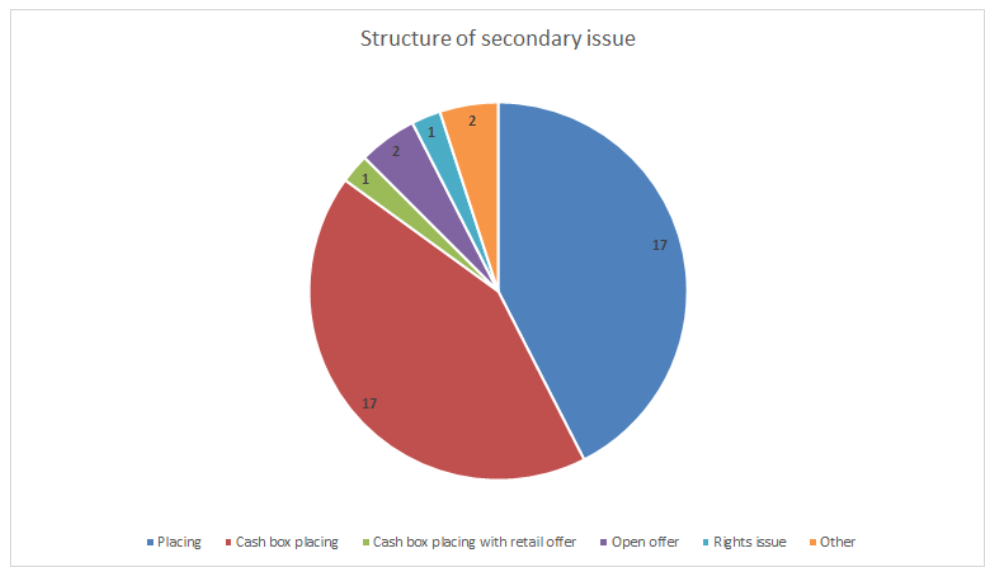 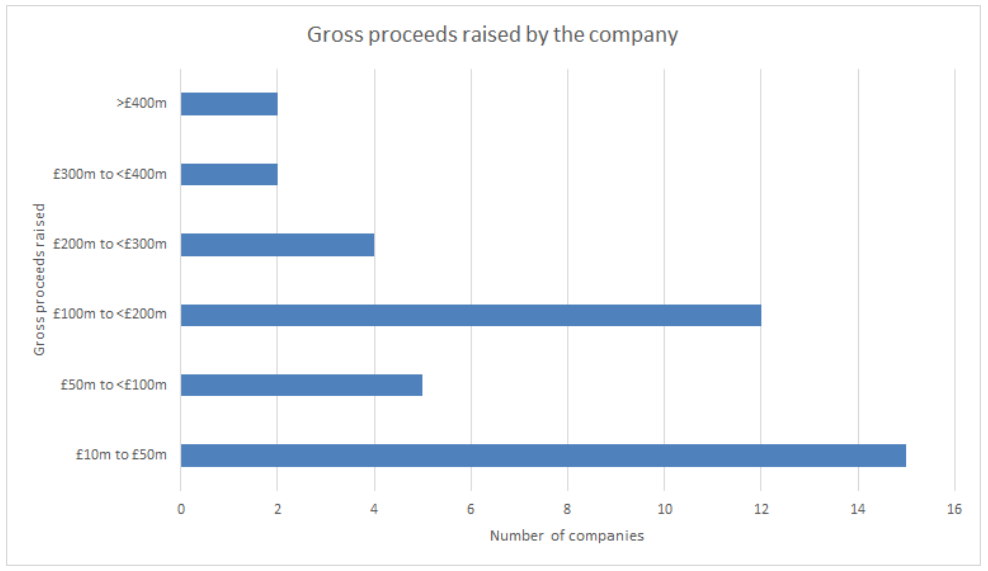 The majority of companies sought to raise gross proceeds of less than £200 million with eight companies raising £200 million and above. The largest fundraising overall in the period reviewed was the cash box placing and retail offer by Compass Group plc which raised £2 billion with the new shares representing 12.3% of its existing issued share capital. The largest fundraising by an AIM company was the cash box placing by ASOS which raised £247 million with the new shares representing 18.8% of the company’s existing issued share capital.

The only rights issue announced in the period reviewed was by Hyve Group plc on the Main Market which is seeking to raise £126.6 million. The two companies which announced open offers were Cathay International Holdings Limited (Main Market) and Amiad Water Systems Limited (AIM) which sought to raise £105 million and £17.6 million respectively.

Open offers and rights issues are required to be kept open for acceptances for at least 10 business days (guidance notes to Rule 24 and 25 of the AIM Rules and LR 9.5) and may require shareholder consents which will lengthen the fundraising timetable. Hyve Group needed to seek shareholder approval for a share consolidation and the authority to allot shares under the rights issue which lengthened the time to completion of the transaction. The notice period for a general meeting and the offer period for a rights issue must run consecutively as the ‘nil paid’ rights which are admitted to trading first cannot have any conditionality attached to them. An open offer can be completed on a shorter timetable than a rights issue where a general meeting is required as the offer period can run concurrently with the notice period for a general meeting.

One advantage of a rights issue is that there is no regulatory restriction on the price at which the rights shares can be offered and accordingly they are useful for large fundraisings at a deeply discounted price. Hyve Group offered shares at a discount of 67.8% to the market price (as adjusted for the share consolidation it was undertaking).

34 companies in our data set completed non pre-emptive placings (21 on the Main Market and 13 on AIM) all structured to fall within the exemptions from the requirement to produce a prospectus (excluding the issue by Supermarket Income REIT Plc under its placing programme). 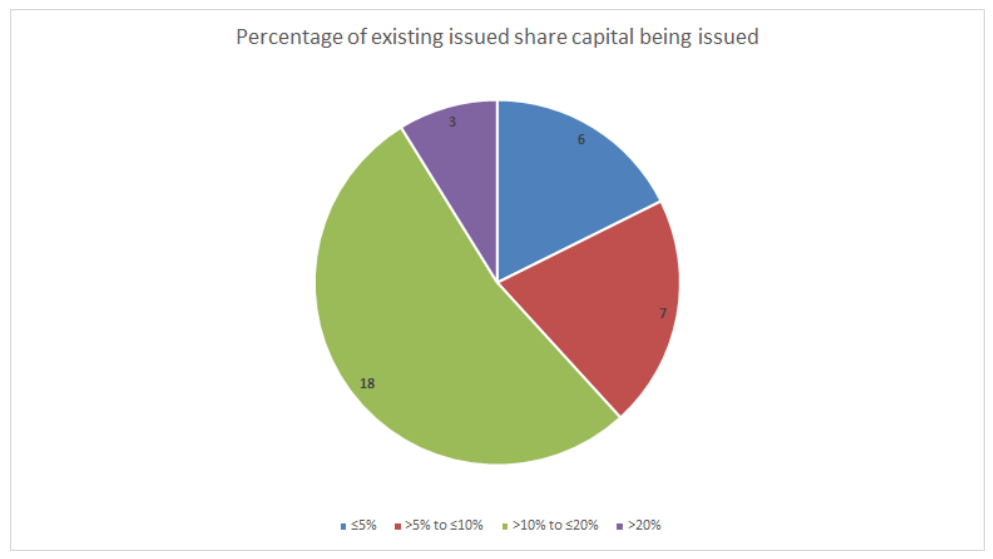 PEG’s expectations of issuers under the new guidance

PEG’s statement on its expectations of issuers in connection with non pre-emptive issues during the coronavirus pandemic states that if the flexibility to issue up to 19.99% of a company’s issued share capital non pre-emptively is used issuers should, among other things, ensure that a representative sample of the company’s major shareholders are consulted and that, as far as possible, the issue is made on a soft pre-emptive basis. 23 companies in our data set stated in their fundraising announcement that major shareholders had been consulted in advance about the non pre-emptive nature of the fundraising.

Nine companies stated that the principles of pre-emption had been respected as far as possible through the allocation process (Compass Group, Keywords Studios, Diversified Gas and Oil, National Express, Hiscox, LondonMetric, Big Yellow Group, Informa, Assura). ASOS stated in its announcement that 95% of the placing shares had been allocated to ASOS’s existing shareholders including a pro rata allocation to its largest shareholder.

It is likely that the trend towards quick non pre-emptive placings of up to 19.99% of existing share capital will continue into the summer as companies make use of the relaxed limits in PEG’s guidance (in place until 30 September 2020) combined with the exemption from the requirement to issue a prospectus where less than 20% of share capital is being issued. Although cash box structures have been viewed with distrust by investors in the past, institutional investors are likely to be more supportive of these structures (as evidenced by Schroders’ open letter to UK PLCs) provided that issuers maintain a dialogue with shareholders about the capital raises including clarity on working capital needs, any potential litigation and significant changes since the last report and accounts. PEG’s guidance also outlines the need for proper prior consultation with major shareholders. Companies with sufficient existing shareholder authority to allot shares (which is typically taken over one-third of issued share capital at annual general meetings) will be able to undertake cash box placings without being required to call a general meeting. For further information on cash box placings, see Practice Note: A guide to cash box placings. Lawyers acting for issuers should check existing shareholder authorities and whether any shares have been issued since the last annual general meeting.

If a general meeting is held, it may be prudent for the company to take the opportunity to amend its articles of association to allow for hybrid general meetings where shareholders may attend either at the physical location of the meeting or by electronic means. For further information see Practice Note: Coronavirus (COVID-19)—holding general meetings and AGMs.

Where a prospectus is required, lawyers should review the measures introduced by the FCA in its Statement of Policy aimed at assisting listed companies raising new share capital. These measures include, among other things temporary relaxations of the FCA’s approach to working capital statements and holding general meetings relating to class 1 and related party transactions. For full details, see Coronavirus (COVID-19)—key issues for Corporate lawyers — Equity capital markets.

The table below contains a list of the placings and cash box placings reviewed raising at least £10 million on the Main Market and AIM during the seven week period from 1 April 2020 to 20 May 2020.