Amid increased scrutiny surrounding directors’ remuneration, the recently published 2019 Spencer Stuart board index noted that there has been a 30% increase in the average remuneration of FTSE 150 chairs over the past 10 years. The report also observed a 0.6% increase in total pay for non-executive directors. In line with this, the Chartered Institute of Personnel and Development (CIPD) found that remuneration packages for the FTSE 250 had been increasing over the last 3 years.

The CIPD’s research found that although there was an overall decrease in pay packages amongst the FTSE 100, 43 of these companies’ CEOs still saw a pay increase. Notably, Centrica plc’s CEO saw a 44% increase in his package. Whilst Centrica’s shareholders approved the resolution regarding directors remuneration in the 2019 AGM, the resolution still received the most dissent with 14.7% of shareholders in opposition.

Market Tracker found that in the 2019 AGM season*, the resolutions to approve the director’s remuneration report and remuneration policy combined constituted almost 30% of the resolutions attracting significant no votes (defined as opposition of 20% or more) across the FTSE 350. For example, at the 2019 AGM for JD Sports Fashion plc, where the chair saw a 10.5% salary increase, 30.5% of shareholders voted against the remuneration report (with a further 19.4% voting against the chair’s special bonus). Although the resolutions still received the required majority to pass, the board have acknowledged the concerns surrounding the remuneration policy, in line with the Investment Association guidelines. The board have stated there will be a ‘review on its practices from a corporate governance perspective’, including a focus on remuneration policy. There has yet to be further comment regarding this. 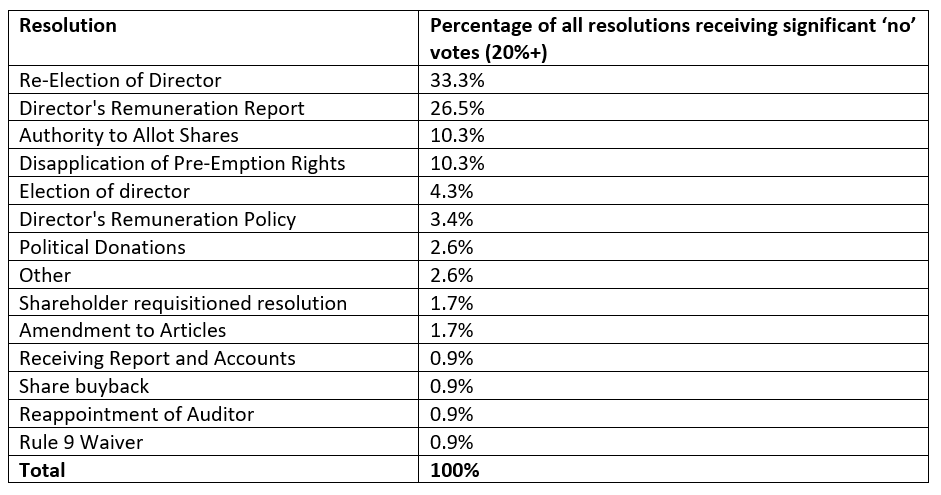 Standard Chartered plc’s remuneration report also saw significant shareholder dissent, with 36.2% voting against the policy in the 2019 AGM, although again, the resolution still passed. The board noted on the public register that shareholder concerns ‘primarily related to the lack of alignment between pension arrangements for incumbent executive directors with the wider workforce’. Resultantly, the FTSE 100 company reduced the pension of the CEO and CFO from 20% to 10%, effective as of January, in line with their wider workforce.

Despite increased shareholder dissent surrounding director’s compensation, the CIPD noted that no remuneration reports were defeated in 2019, and between 2014 and 2018, only 6 packages were defeated, suggesting shareholders ‘say on pay is having little effect on restraining top pay’.

Nevertheless, there are signs of progress as evidenced by the 2019 Spencer Stuart board index reporting a slight decrease of 3.2% from the figures reported in 2018 regarding average chair retainer. Additionally, the CIPD reported a 16% decrease in mean CEO pay for the FTSE 100 between 2017 and 2018, acknowledging in the report that 64% of workers felt that CEO pay is too high in the UK.

Market Tracker looks at voting at the AGM in relation to remuneration and annual report disclosures regarding CEO pay ratios in its 2019 season AGM trend report, to be published later this month.

*The AGM 2019 season is defined as companies whose financial year end is between April 2018 and March 2019 (excluding closed ended investment funds).