Do you take pleasure in licking this all-American baked treat?

Fair enough, but vloggers Dan Howell and Phil Lester do.

For those in the know (eg not me), you'll be aware that Dan and Phil present a show on Radio 1 and are also professional video bloggers. (Dan's YouTube Channel danisnotonfire—'The internet support group for people that hate people'—currently has almost 4,200,000 subscribers. Phil, on the other hand, 'only' has about 2,175,000 followers for his 'Amazing Phil' channel.)

Earlier in the summer, they appeared in a video in which they took part in a 'lick race' involving Oreo cookies (don't ask). The two vloggers had been engaged by Mondelez UK Ltd to create ads on behalf of Oreo. They were both paid and provided with the product for use in the video.

Here's how they got on (remember: what is seen cannot be unseen):

A BBC journalist complained to the ASA, which regulates ads in the UK, saying that this video, together with four other videos from various other well-known vloggers, were not 'obviously identifiable as marketing communications'; in other words, they were ads.

At the same time, it issued guidance for vloggers on how to avoid making the same mistake as the Oreo vloggers by making it clear when a vlog amounts to advertising:

In its guide, the regulator makes it clear that:

When it comes to Social Media, numerous marketers have fallen foul of the ASA by blurring the line, intentionally or not, between independent editorial content written about a product and advertising copy.

In essence, the guidance states that vloggers need to comply with these three principles:

As a result of the ruling, this is now what it says under Dan Howell and Phil Lester's video today: 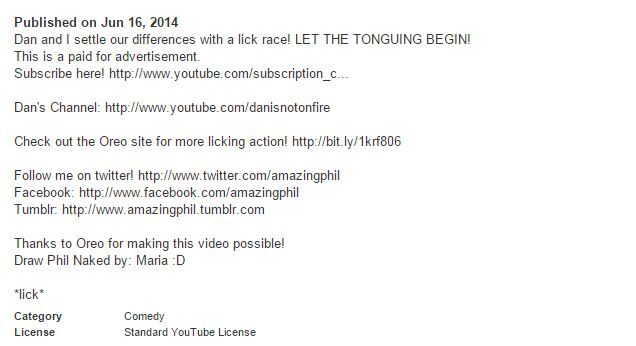 That said, I reckon that it could be clearer still: perhaps by adding the terms 'ad' or 'promo' in the title of their video. Then nobody could be in any doubt.

The ASA sometimes takes a more robust stance than businesses would like (see our Comet post from last year: Businesses: What do you mean you're not perfect?). I'd be the first to argue it doesn't always get it right—well, they are human after all—but erring on the side of caution should help businesses avoid any embarrassing PR pitfalls (unless you are of the school that any PR is 'good' PR, which has risks all of its own).

What's more, I don't get the impression that the ASA is out to destroy vlogging, rather it is trying to encourage transparency for those that use this technology. As the ASA states:

As outlined last year in our ‘Blurring advertising and blogs’ piece, it’s perfectly legitimate for vloggers (or bloggers, tweeters etc) to enter into a commercial relationship and be paid to promote a product, service or brand. We’re not here to regulate that relationship or to stop vloggers earning money. But when that commercial relationship is in place then the onus is on the advertiser, and by extension the vlogger, to be upfront about it and clearly disclose the fact that they’re advertising.

To be fair, I can't helping thinking that it might take some time for this message to filter through to this nascent industry. For many, this sort of thing simply falls under their radar. Perhaps in the long-term the industry should look into a logo that could be used in on-line videos to indicate a commercial relationship, perhaps something like the product placement 'P' logo used on TV?

Finally, don't forget that in many respect this is nothing new. The Consumer Protection from Unfair Trading Regulations 2008 state that advertisements need to be identifiable as such (and they’ve 'only' been in force since May 2008: click here for guidance published at that time). Indeed, the Office of Fair Trading took action against Handpicked Media in 2010 for not making clear that blogs were paid for.

As for Phil Lester, it doesn't sound to me as though he is absolutely convinced by the ASA's stance:

So what do you think? Has the ASA approached this correctly or is it a 'sledgehammer to crack a nut'? Should there be a law to write tweets with proper grammar or punctuation (my idea). Do let us know below.