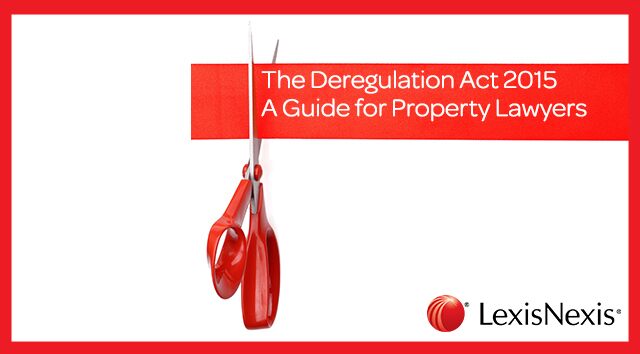 How will the Deregulation Act 2015 (DA 2015) impact the property sector? James Main, solicitor at DMH Stallard, explores the provisions and suggests that in some cases they will add to the regulatory burden, particularly for landlords of residential property.

What does DA 2015 mean for property lawyers?

The purpose of the Deregulation Act 2015, as the name suggests, is to try to clarify and simplify a number of areas of law, cut red tape and repeal obsolete legislation. From a property perspective, it is questionable whether this has been achieved and arguably the provisions of DA 2015 add to the regulatory burden for landlords of residential property in particular.

What were the key features of DA 2015 that property lawyers should be aware of?

The most widely publicised change is in relation to the provisions governing the management and termination of assured shorthold tenancies. The tenancy deposit regulations contained within the provisions of the Housing Act 2004 (HA 2004) and extended by the Localism Act 2011 were far from straightforward and have resulted in a number of cases coming before the courts. The provisions of DA 2015 have brought some clarity and a degree of common sense to the law surrounding the treatment of tenancy deposits, which is particularly welcome in cases where the deposit was received before the regulations came into effect.

DA 2015 also introduces provisions that prevent a landlord serving a notice under HA 2004, s 21 (section 21 notice) in certain circumstances where disrepair has been reported. It also gives the Secretary of State power to prescribe the form of notice to be served, and to impose certain minimum requirements on landlords in relation to:

Some of the less well-publicised changes include:

How has DA 2015 affected the following?

Superstrike Ltd v Rodrigues [2013] EWCA Civ 669, [2013] All ER (D) 135 (Jun) and Charalambous and another v NG and another [2014] EWCA Civ 1604, [2014] All ER (D) 175 (Dec) highlighted some of the problems landlords face due to a lack of clarity in the initial regulations. The regulations caught out many landlords who, often in all good faith, would place a deposit in a personal bank account, or would correctly protect the deposit at the outset of the tenancy but fail to re-protect it when the tenancy became periodic.

DA 2015 restores a measure of common sense while trying to maintain the protection provided by the tenancy deposit regulations in the first place. The decision in Superstrike in particular was surprising in that it arguably went beyond what was intended by the tenancy deposit regulations. It is not uncommon for a situation to arise where the fixed term of an assured shorthold tenancy will expire and the tenant may ask for a couple more months in the property. The decision in Superstrike meant that in this situation, if the landlord allowed the tenant to stay on for a period of time but did not withdraw and re-register the deposit, they would not be able to serve a section 21 notice unless the deposit was returned to the tenant.

The tenancy deposit regulations were designed to protect the tenant from the unscrupulous landlord who had no intention of returning the deposit from the moment it was handed over. It is difficult to see why all of those landlords who, in good faith, took a deposit at the outset and protected it in accordance with the regulations at their own cost, should be punished because the deposit was not re-registered upon expiry of the contractual term of the tenancy.DA 2015 addresses this imbalance by clarifying that once the deposit has been received and correctly protected, it will not need to be re-protected upon expiry of the contractual term.

The decision in Spencer v Taylor has been extended by DA 2015 to tenancies which were periodic from the outset, to which HA 2004, s 21(4) would apply. From 1 October 2015, therefore, whether the tenancy is for a fixed term initially or is periodic from the outset, the section 21 notice will no longer need to specify the last day of a period of a tenancy. This should reduce the scope for dispute over the validity of a landlord’s section 21 notice. In an attempt to balance the interests of landlord and tenant, DA 2015 also includes an express provision that the tenant will be entitled to a refund of any overpaid rent where a tenancy comes to an end mid-way through a period.

However, to prevent us getting carried away with the idea that deregulation means what it says, DA 2015, s 38 allows the Secretary of State to introduce more ‘prescribed legal requirements’ in relation to the condition of the property generally. While it is a little difficult to make an exact comparison until these prescribed requirements have been published, the wording of DA 2015, s 38 suggests that the requirements could be quite wide-ranging and onerous for a landlord. If a landlord is in breach of the requirements, it will be prohibited from serving a section 21 notice—which brings into question the need for further protection for tenants, which is provided by DA 2015, s 33 regarding retaliatory evictions. However, we will have to wait and see what the extent of the ‘prescribed legal requirements’ is before that comparison may be taken too far.

The provisions in relation to retaliatory evictions are troubling. DA 2015 provides little guidance as to the substance of an ‘adequate’ response from the landlord. Clearly, much will turn on the tenant’s perception of the severity of the condition of the dwelling, and there is every possibility that the landlord and the tenant will disagree about:

The nature of the accelerated possession process is that the section 21 notice is non-fault based and ought to provide a swift, cost effective solution for a landlord who needs to recover possession of a property. It is quite possible that if a property is genuinely in disrepair, the landlord will be precluded from serving a section 21 notice in any event in view of the prescribed requirements that will be introduced under the powers vested in DA 2015, s 38 on the Secretary of State. However, even if the property was in disrepair and a landlord was able to proceed with the eviction process, the order for possession and subsequent eviction does not affect a tenant’s right to claim compensation for disrepair where the landlord is in breach of its contractual and statutory duties.

That being so, I am not sure these new provisions are either appropriate or necessary. I anticipate a significant increase in the number of hearings being listed as a result of this provision, where there is dispute over the validity of the tenant’s complaint and the extent of the landlord’s response. It potentially allows a streetwise tenant to extend the possession process by months, if not years, and ultimately even if the landlord is entirely vindicated there will be little prospect of recovering any unpaid rent or potentially significant court costs.

With DA 2015 slowly bedding down, what will be the challenges for property lawyers?

Lawyers, whether for landlord or tenant, will need to ensure they are on top of the detail in relation to tenancy deposits—when they were taken, when they were protected and when the prescribed information was served. Landlords will need to ensure they respond to complaints promptly and thoroughly and tenants need to ensure they make their landlord aware of any concerns regarding the state of the property. For lawyers, whereas one could say with a degree of certainty whether a possession claim under a section 21 notice was likely to be successful, in some cases it will now be far more uncertain. There may often be cases where, if one of the grounds of The Housing Act 1988, Sch 2 can be made out, the merits of proceeding with a HA 1988, s 8 notice and conventional possession proceedings will outweigh the benefits of using the accelerated possession process.