Construction in the Middle East—key projects and outlook

Construction in the Middle East—key projects and outlook How is construction activity in the region?

The major economies of the Middle East have been significantly affected by the drop in oil and gas prices since 2014, due to the region’s reliance on oil and gas as its major exports and the key role of state entities in procuring major projects. The resulting economic uncertainty has, in some cases, caused governmental departments to cut existing budgets and to reduce planned spending for infrastructure development and related activities, which has in turn affected the level of construction activity over the last few years.

With these fiscal challenges in the region, alternative funding and financing structures are moving more sharply into focus, especially delivery of infrastructure using public-private partnership (PPP) and concession models which previously may have not been considered when the oil prices were significantly higher.

Moreover, the reduction in the number of projects being tendered has increased competition throughout the region. Many contractors and consultants are now looking to offer innovative commercial solutions in order to secure work (including the provision of funding), and cheaper ways to deliver solutions in order to remain competitive.

While construction activity levels have by and large reduced across the region, nevertheless, certain jurisdictions remain reasonably active. In Qatar, for example, the country is preparing for the 2022 World Cup and is in the process of building new roads, railway networks, football stadia and other infrastructure and facilities to support the World Cup Tournament and its 2030 vision.

The same is true for Dubai—with Expo 2020 coming up, the construction sector remains active with a particular focus on transportation and general infrastructure.

In Saudi Arabia, the recent 2016 Middle East Economic Digest reported that projects worth $442bn in 2017 have been earmarked for the construction sector, followed by $228bn and $170bn for the transport and power sectors respectively. It is particularly noteworthy that the power sector is expected to launch a renewable energy programme between 2017 and 2023 to produce 10 gigawatts of power requiring an investment of between $30bn to $50bn. It has also been reported that Saudi Arabia has commenced feasibility studies for two commercial nuclear reactors.

We identify below some of the key infrastructure projects being procured or constructed in the Middle East. 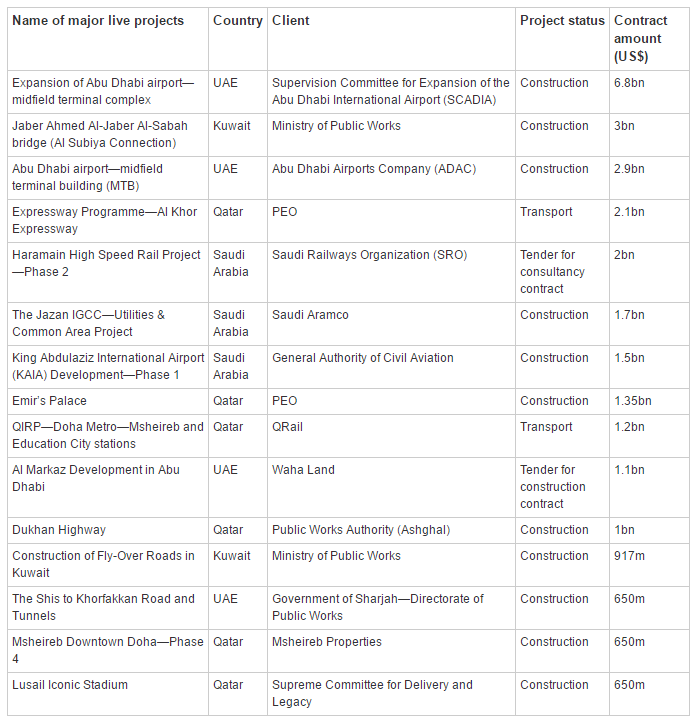 What is the outlook for construction?

The key issue facing the construction sector has been the general reduction in spending in the Middle East by procurement authorities as outlined above. This has caused a downturn in new work and new opportunities in the market. We have also noticed an increase in payment issues with regard to on-going projects and, unfortunately, it seems to be becoming increasingly common in the market for suppliers, contractors and consultants to experience delays/reductions in payment which in turn is causing cash-flow issues throughout the whole supply chain.

Issues that are beginning to surface as a result of the region’s market downturn include funding deficits, declining asset values and increasing sovereign debt, all of which are contributing to a general negative sovereign credit outlook among Gulf Cooperation Council (GCC) countries for 2017. It is no surprise that the market sentiment in the first quarter of 2017 has generally been fairly pessimistic among many contractors and consultants. Non-priority projects and schemes have been put on hold until further notice including the Qatar-Bahrain Causeway, Qatar’s national healthcare scheme, the ambitious Sharq Crossing Programme and the Inner Doha Re-Sewerage Implementation Strategy (IDRIS).

It is anticipated that the Middle East will continue to consider alternative means to finance the delivery of its vital infrastructure. Kuwait and UAE have already introduced a PPP law (Kuwait’s PPP Law is Law No 116 of 2014 Regarding Public Private Partnerships; the UAE’s PPP Law is Law No 22 of 2015 Concerning Regulating Partnership between the Public and the Private Sector in the Emirate of Dubai), and it is anticipated that Qatar will implement its proposed PPP law during the course of 2017. It was announced in March 2016 that the Qatari Ministry of Commerce would submit a draft law covering the use of PPPs. There is speculation in the market that there is a pipeline of potential projects earmarked for when the PPP law becomes effective in Qatar. The introduction of PPP laws in the region is a good indication that the governments of the Middle East are starting to look at alternative ways to deliver key infrastructure especially in the health, education and water sectors. This is a positive sign and will present various opportunities for businesses operating in the Middle East.

Elsewhere in the region, it is evident that other fundraising initiatives are being actively pursued. Saudi Arabia has recently introduced a National Centre for Privatisation which it has been reported will also be responsible for overseeing new PPP procurement options in the country. PPP is already being pursued on a number of Saudi transport, education and health sector projects. Saudi Arabia is also preparing for the IPO of a 5% share in Aramco, which is anticipated to be the world’s largest IPO and would deliver a welcome injection of funds to the state treasury.

There still remains uncertainty in terms of which goods and services will attract VAT and which exemptions, if any, will apply under this new regime.

However, the entire supply chain in the construction sector in the UAE should consider the changes they will need to make to their businesses, including accounting systems and contracting strategies, to calculate and report VAT when the law comes into force.

It is also anticipated that VAT will be implemented in the rest of the Middle East after the UAE, and it has been reported that all six GCC countries have now signed a unified VAT agreement. This is an area which is likely to attract further interest in the upcoming months.

This article is part one of a three-part series on construction in the Middle East, which was published on LexisPSL. See also:

Construction in the Middle East—legal issues and standard forms

Construction in the Middle East—governing law and disputes

The above links require a LexisPSL Construction subscription. Click here for a free trial.